Movie Review: "The Legend of Tarzan" Is A Swinging Good Time At The Movies 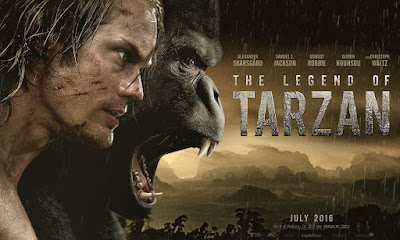 For months, it's seemed that the buzz on The Legend of Tarzan was based almost entirely around puzzlement as to who exactly wanted a new Tarzan movie. The answer, actually, is the two of us. When we were kids we'd watch the old Johnny Weismuller films at our Grandma's house, and when characters like Superman, Flash Gordon, etc, starred getting new treatments in the late 70's and early 80's, we were very upset that when Tarzan returned to the big screen it was for a Bo Derek nudie movie (Tarzan, The Ape Man)  we couldn't even see (not that we wanted to; We were seven years old and wanted Tarzan to swing from trees and wrestle gorillas. We didn't really care what Jane did or what she wasn't wearing when she did it.). When another live action take did come along a few years later, it was Greystoke: The Legend of Tarzan, Lord of the Apes, which is actually quite a good film, but not exactly the big budget B-jungle adventure movie we wanted. The 1999 Disney movie, good as it was, was still its own animal, and the less said about the low budget 1998 Casper Van Dien vehicle Tarzan and the Lost City, the better. So our inner kids have been waiting for Tarzan to get the Superman: The Movie treatment for about 35 years. 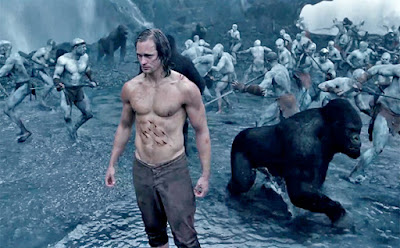 It turns out what director David Yates (the final four Harry Potter films) has given us is closer to the 1990's Robin Hood: Prince of Thieves, treatment: a silly but semi-gritty, sometimes anachronistic adventure that veers between unabashedly pulpy and trying to be a bit a more serious minded, and tries to reconcile its setting and source material with more enlightened modern sensibilities.  And frankly, we're okay with that. The Legend of Tarzan isn't one of the all-time great adventure films, but with the right mindset (and fondness for the material) it's a lot of fun. And the more it embraces the B-movie cinematic history of the character, the more fun it is. 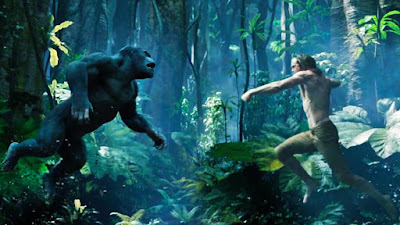 As our story begins the year is 1890, and Tarzan (Alexander Skarsgård ) is living in London under the name John Clayton, Earl of Greystoke. He has become a civilized British gentleman (with an inexplicable touch of Swedish to his accent), speaking in articulate English and holding his pinky up when sipping tea (probably because he saw The BFG.). He's left his days as Lord of the Apes behind and seems none too eager to revisit them. But when asked to serve as an emissary to the Belgian Congo amid rumors of the natives being exploited and enslaved for diamonds, Lord Greystoke reluctantly packs up Jane (Margot Robbie)  and returns to Africa. With them is George Washington Williams (Samuel L. Jackson), a former civil war soldier, Christian minister and sarcastic bad ass (because it's Samuel L. Jackson). Soon they discover that the stories are true as they run afoul of Belgian Captain Leon Rom (Christoph Waltz), and John Clayton is forced to embrace his identity as Tarzan once again to save the woman he loves. 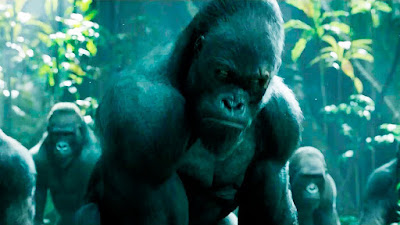 The story is a mix of classic jungle movie tropes and playing fast and loose with history (George Washington Williams is an actual historical figure who did visit the Congo to investigate alleged abuses by King Leopold II of Belgium, and Leon Rom was indeed a soldier for Leopold notorious for his appalling treatment of the Congolese natives, which was actually a lot more brutal than what we see depicted in the film.), but it really comes down to Tarzan swinging from trees, wrestling apes and fighting the bad guys, and on that level the film really delivers. Director Yates has considerable talent, and while he may not involve us as much with the character and story as he did in his Potter films, he certainly guides the camera and action with skill and keeps us entertained (and has our vote as director for the next Bond film.). The cast is solid, with Skarsgård's stoic personality and strong physicality working very well for the title character, and Jackson infusing the proceedings with a welcome  sense of charisma and humor. As Jane, Robbie may seem a bit out of place at times, but she showcases the presence and star quality that's made her a current hot commodity in Hollywood, even if the script's treatment of the character sometimes over does the sarcasm and spunk in an attempt to avoid making Jane too much of a helpless damsel in distress. Waltz, as he was in Spectre, is a suitable villain, but nothing special. He seems to be settling in to a role as the new Alan Rickman but unfortunately, so far his action movie villain roles are not particularly memorable.  Hounsou, who pretty much had to be in this movie, provides a surprising level of emotion to a small and simple role (though why his character speaks perfect English is a major logic lapse.) . 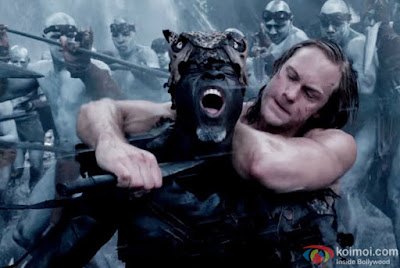 The screenplay is credited to Adam Cozad, whose only previous credit is Jack Ryan: Shadow Recruit, and Craig Brewer, who, as writer and director of Hustle & Flow really had us hoping the apes would join Tarzan for a chorus of "It's Hard Out There For a Chimp". It's a serviceable script for a summer adventure film, but has a tendency to leave ideas less than fully explored. Why exactly does Tarzan seem to want to be so distanced from his past, while Jane can't wait to get back to the jungle? If we had a better sense of why he seems to want to bury the Lord of the Apes inside him, it could have lead to a much more involving character arc as he accepts who he is and becomes Tarzan once again. Instead we're left with ambiguous and sometimes inconsistent motivations for the character. In addition, the film takes a little too much time getting started. But when it takes off it's engaging and sometimes quite thrilling. While the animals are largely CGI, they're good CGI, and that leads to to some truly spectacular sequences with Tarzan and the apes, as well as some surprisingly touching moments in flashbacks of the origin story.

The use of historical figures and settings in a silly entertainment film like this can be controversial, and at the screening we attended some critics were either expressing concern that it will misinform people or dismissing the movie outright because of it. These are genuine concerns, but for us, this was movie was exactly the reason why our encyclopedia collection was so beloved as children. Movies made us interested in history, and we looked up the real stories and studied them. In the internet age, you can find out the truth on the phone exiting the theater, and frankly, those who aren't interested enough to do so aren't likely to be influenced much by the history depicted anyway.

All in all, in a summer where too many of the action blockbusters have underwhelmed, The Legend of Tarzan is a welcome bit of escapist fun. It's far from a perfect movie but it's a satisfying summer adventure.