Bryan Cranston sizzles in "The Infiltrator" 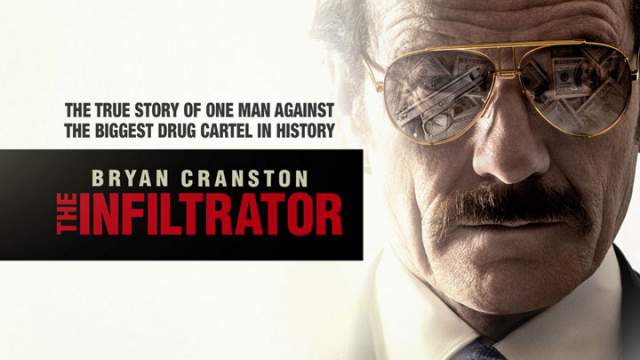 
We may be the most outspoken, enthusiastic Bryan Cranston fans out there who have actually never seen a single episode of Breaking Bad (it's not easy to keep up with TV when you're seeing two or three movies a week.). Our enthusiasm for the actor began with his prior series, Malcolm in the Middle. Cranston was not the lead on the show - in fact, he wasn't even the lead parental character - but his immense talent shown through and we were convinced ever since the roller disco episode that this was one of the most underrated actors working today, and hoped we would one day be recognized as one of the giants in his field.  After years of fitting in supporting roles (usually involving bad wigs) during his off time from his acclaimed series, Cranston finally moved into overdue  very long overdue lead actor turn last year with his Oscar nominated performance in Trumbo, and if The Infiltrator is any indicator, he's likely to become a new main stay, and to say that it's about time is an under statement.  He's probably going to start inheriting the Pacino and DeNiro roles, but he has just enough guy next door charm that he could take some of the Hanks roles as well. 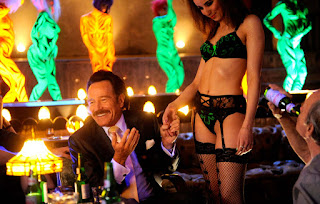 The Infiltrator tells the true story of US Customs Service Special Agent Robert Mazur, an under cover operative during the 1980's American war on drug on drugs, who took down Pablo Escobar's money laundering organization under the alias "Bob Musella." Under this false identity, Mazur became a pivotal player in the drug trade, cleaning dirty cash for the cartels and taking down one of the largest banks in the world, while trying to preserve a marriage a family life that didn't mesh well with his chosen profession.

Mazur is given the option of early retirement with full benefits by his boss (Ryan), but is simply too caught up in his work to take it, promising his wife that this will be his last case. He works alongside Emir Abreu (Leguizamo), an uncouth agent who is heavily immersed in the drug world and handle the seedier elements while Mazur plays the part of high roller. Mazur also enlists the aid of Joe (Andy Beckwith),a criminal serving time in prison, to help him get into the all of the right places and establish his cover.  Finally, when Mazur makes up a fiancee as an excuse for turning down being pleasured by a hooker (a gift from a drug kingpin), he is forced to accept another partner, Kathy Ertz (Kruger) a "virgin" undercover operative. Ertz is there strictly to play the role of the fiancee and keep Mazur's cover in tact, but she takes to the job like a duck to water and the two work surprisingly well together. She becomes not only an asset to the operation but someone whom Mazur can trust and lean on a bit, even if the situation doesn't help his already strained relationship with his wife. 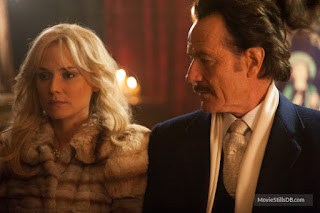 The Infiltrator is a well executed and involving procedural crime drama-thriller, and director Brad Fuhrman (The Lincoln Lawyer) is likely to get a bit of a boost out of it, but it's very definitely the stellar performances of a brilliant cast that raise this one up a notch. Leguizamo and Kruger give their best work in years, both playing so well off of Cranston that it's a thrill to watch (Leguizamo has delivery that is just amazing at times.). Ryan is excellent as always (if underused) and Olympia Dukakis is absolutely delightful in an all too brief role as Mazur's Aunt.

Benjamin Bratt (another fine actor never quite given his due) is quite effective in the role of Roberto Alcaino, one of Escobar's top men, but the character could have been more, though it's certainly not the actor's fault. The friendship that develops between "Bob," his "fiancee" and Roberto and his charming wife Gloria, which blurs the line between gaining trust in order to complete the job at hand and actually making a human connection, is a interesting plot that is never quite as riveting as it wants to be, and that may be because this is a rare case of a movie possibly moving too quickly. The case is so big and far reaching that many of the individual elements get a bit too cursory a glance, and it would have been nice to delve a little deeper here. It feels as if the movie needed to make a stronger commitment one way or the other as to whether this relationship dynamic was a subplot or the major focus of the film. While the Alcainos are likable people on the surface, Roberto is a murderous kingpin and it's hard to feel a connection to the guilt Mazur and Ertz are feeling, because we haven't gotten to see truly strong bond of trust develop. As much as it goes against our judgement to suggest a movie be longer these days, an extra 15 to 20 minutes spent on that plot thread might have made a difference.

This is very good film, and a decidedly welcome grown up drama in a summer of fluff, and it gives us some interesting scenes we haven't seen before in this kind of movie. But it still doesn't quite reach the level of being a truly inspired Best Picture contender. But is a very worthy (and likely) contender for a Best Actor nod.