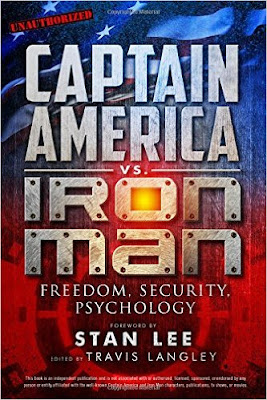 This is a review of Captain America vs. Iron Man: Freedom, Security, Psychology, edited by Travis Langley, PhD

What makes a hero? More to the point, what makes a superhero? Perhaps the answers can be found if we look to psychology? That’s the idea behind Captain America vs. Iron Man: Freedom, Security, Psychology, edited by Travis Langley (Star Wars Psychology: Dark Side of the Mind). Set largely against the backdrop of Marvel’s Civil War story arc (including references to both the comics and the films), Captain America vs. Iron Man uses psychology to compare and contrast the two heroes, Steve Rogers and Tony Stark.

Fundamentally, both men are good. They want to good for others, and for the world they inhabit. Each has experienced profound loss, each has come close to death, and both were spurred toward heroism as a result. To what extent did post-traumatic stress disorder (PTSD) play a role in their actions, if at all? It’s clear in Iron Man 3 that Tony is living under a great weight after the events of The Avengers. Steve, after having been through a grueling war and then frozen for 70 years, has also had his share.

Each man’s stance on the freedom and security of the American people, and how best to ensure both, is also examined. Clearly, from both the comic books and the recent film, Captain America: Civil War, Steve and Tony have very different ideas on how to achieve those ideals. What drives each man, in a psychological sense, to arrive at their respective positions? Are you Team Cap or Team Iron Man? What does that potentially say about you?

Which is more valuable — Tony’s intelligence or Steve’s super strength? Marvel has a raft of superheroes. How do they relate to Captain America or Iron Man? More importantly, how does the public view them? In relation to Civil War, how do Steve and Tony view each other? Neither man appears to be suffering from any major disorders, but their motivations and the way they approach the difficulties of the day say a fair amount about the psychological strengths and weaknesses of each man.

Featuring a forward by Stan Lee, Captain America vs. Iron Man is a collection of 10 essays penned by a variety of contributors who bring their own unique perspectives to bear. They know their subject matter, and they’ve got true geek cred. While each essay is concise, a wealth of analysis can be found within. This makes it simple for a lay person (with little to zero experience in the field of psychology) to navigate the discussion. The analysis is never bogged down needlessly, and it’s not overly clinical.

• Origins looks at, obviously, the beginnings of the characters and how they developed into superheroes.

• Missions examines the practicalities of being a superhero, such as maintaining a certain level of physicality and intelligence and the role of masculinity and how it comes into play when conflict arises.

The extensive footnotes and thorough index are much appreciated!

Part of me wishes I had read this book prior to seeing Captain America: Civil War. I look forward to viewing the film in the aftermath of reading this book, as I can only imagine it will heighten the experience. Captain America vs. Iron Man: Freedom, Security, Psychology will give you a richer understanding of Steve Rogers and Tony Stark. Will it change your team affiliation, or will you find yourself straddling the line between these two characters? One thing is sure, Team Cap or Team Iron Man, we all possess traits of both men to some extent. You know what that means, right? We can be heroes.