Steven Spielberg Universal Studios Tour. He discusses the movies he shot and how he got thrown off a Hitchcock movie. 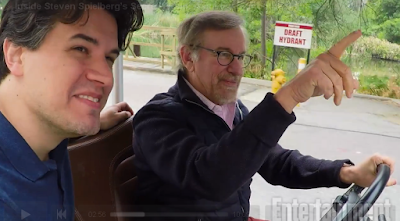 This has to be one of my favourite behind the scenes videos featuring Steven Spielberg I've watched for quite some time.  Steven Spielberg drives around Universal Studios lot and talks about the movies he shot.  He also tells us how he used to sneak onto the studios and watch TV shows being made.  He even confesses how he got thrown off one shoot (a Hitchcock movie) by a third assistant director.

Look out for the part where Steven tells us he wants the Orca boat from Jaws to be remade for the lot.  “I’m going to actually ask them to rebuild it and put it back here,” Spielberg says. “Because the tourists would love to see the Orca here.”

It really is a wonderful video and any Steven Spielberg fan needs to watch this.  He mentions Jaws, Back to the Future II, War of the Worlds, Lost World and more.