Steven Spielberg Convinced J.J. Abrams To Direct Star Wars By Asking In Front Of His Wife 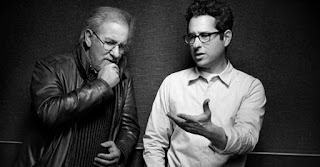 In a recent interview with Hollywood Reporter, Steven Spielberg reveals how he managed to convince J.J. Abrams to direct Star Wars by asking him in front of his wife.  Steven says in the interview:


I brought J.J.’s name up. I thought J.J. would be the best person to direct Episode 7 and I called J.J. and said ‘Would you do it if it was offered to you?’ He said, ‘I would but my wife won’t let me ’cause she doesn’t want me to restart any more franchises.’ But I went to Kathy and asked if I could get J.J. to say yes to this would you consider it? Kathy said ‘Are you kidding? Of course I would. But why would J.J. do Star Wars; he’s already done Mission Impossible and Star Trek.’ So I take Katie Abrams and J.J. to dinner that night to Giorgio with my wife, Kate, and right in front of Katie Abrams I popped the question. I said to Katie, ‘I think there’s a chance that J.J. could direct Star Wars. What do you think of that?’ And Katie turned to J.J. and said, ‘That would be amazing. Really?’ And I went outside the restaurant, picked up my phone, called Kathy and said, “When can we meet with J.J.?” And that’s how the whole thing began.


You can read the full interview here.