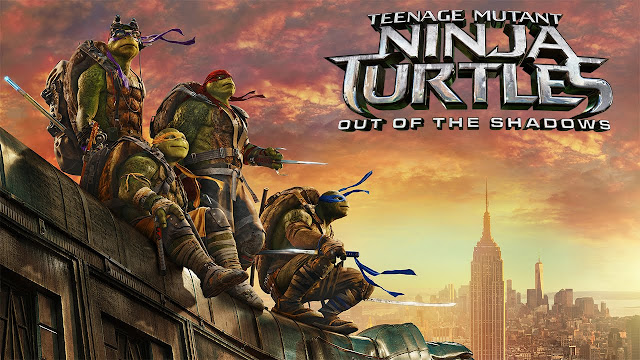 The 2014 version of Teenage Mutant Ninja Turtles was somewhat notorious for running away from its source material: changing the heroes' origin story, turning the villains into different characters entirely, even supposedly intending at one point in development to turn the titular turtles into aliens. Fans seemed to agree it was better than their worst fears associated with a version produced by Michael Bay had lead them to expect, but it was a film that simply didn't "get" the property it was trying to adapt. These fans are likely to be much happier with the sequel,  Teenage Mutant Ninja Turtles: Out of the Shadows, which, for all its considerable faults, enthusiastically embraces the material and emulates the the late 1980s cartoon and early '90s big screen adventures. 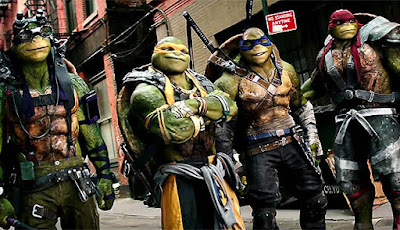 As the story begins, our heroes are still operating in secret (the shadows of the subtitle), living in the sewers and avoiding being seen, unable to take any credit for saving New York City from the nefarious Shredder. In fact, by some sort of arrangement with the turtles, the credit has gone entirely to former news camera operator Vern Fenwick (Will Arnett), who has used to it do exactly what you'd expect from a character played by Will Arnett: make money and hog the spotlight. But the turtles, particularly Michelangelo, long for the acceptance that eludes them, and the ever present tension between leader Leonardo and moody Raphael is heating up. Meanwhile, their journalist friend April O'Neil (Megan Fox) is using her pursuit of a big story involving scientist Baxter Stockman (Tyler Perry) as an excuse to disguise as a hot nerd and sexy school girl (it only makes marginally more sense in context, but the only explanation you need is that Michael Bay is still listed as an executive producer). And finally, New York corrections officer Casey Jones (Stephen Amell), assigned to transport the Shredder to a new location, dreams of glory as a real cop, and maybe a hockey player (or a Hockey Cop), and tries to prove his versatility during his hiatus from the TV series Arrow by acting overly cheerful and slightly raising the pitch of his voice, in contrast to his dark and brooding character on television (he's trying so hard, and seems so unsure of the choices he's making as an actor, that his performance plays more like an audition than the final product.). 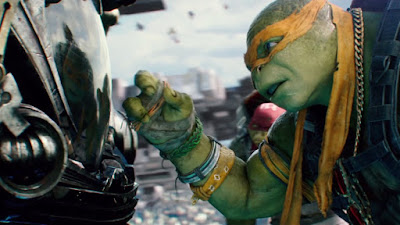 Director Dave Green (Earth to Echo) appears to have far more fondness for the material than his predecessor Jonathan Liebesman did, and also has a more restrained, less frenetic visual style (though some of the action scenes still feel a bit chaotic and hard to follow). The script wisely chooses to let April take a back seat to the turtles this time, allowing the four reptilian heroes to dominate their own film while better establishing their individual personalities (in the same broad strokes as the cartoon theme song did, but still, the essence is there) and put more emphasis on the dynamic between them. They've even softened and cuted up the character design for them since the last one in a subtle way, making them more endearing while still retaining their basic look of steroid induced buffness in case you forget for one second that this is a Michael Bay production and anything that doesn't have cleavage has to explode or have biceps the size of parked cars. The director has also thankfully gotten rid of the voice of Johnny Knoxville as Leonardo and made Tony Shaloub's Splinter much more rat-like and dignified.

Some of the elements at play here really work quite well, almost perfectly matching what we've come to expect from the brand name. Others veer off into the requisite overblown Hollywood blockbuster mistakes, but what is more or less always on point is the tone, as well as the character dynamic of the turtles themselves.

None of the actors portraying humans does much to distinguish themselves, but for the most part they don't detract, either. Fox is obviously not a very skilled actress, but she's nearly as hideous in these movies as her most vocal detractors insist that she is, and she gives one of her better film performances in this franchise. That may not be much of a compliment, but honestly, she really does fare better than Amell, who does action much better than comedy, and never gets a chance to show the intense presence that works so well for him as Green Arrow. Arnett is just Arnett: he gets a few scenes to do his thing, and that's about it. Perry mugs shamelessly in a role that doesn't call for it, and Linney manages to keep her aloof dignity intact by staying committed and professional in a thankless role as the Chief of Police. As for Gary Anthony Williams and Stephen "Seamus" Farrelly, who play fan favorites Beebop and Rocksteady, they are even more over the top than Perry, but they have more license to be, and for the most part it works. The three of them share an unintentional highlight of the film in what may be the biggest cinematic laugh of the year, as the clunky script asks Stockman to provide a less than convincing pseudo-science explanation for the transformation from man to beast. Apparently Applebaum and Nemec have heard of Charles Darwin's theories, but have idea how they work. 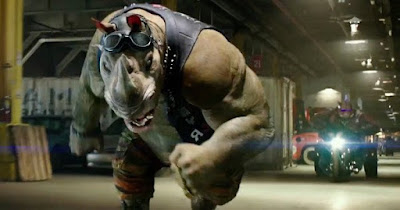 Ultimately, this is not only not a great film, it's a stretch to call it a good one. It hasn't got an active brain cell to spare and it's too frequently crass and juvenile.  But it is a lot fun if you're a kid or have a fondness for the franchise, and we admit that we've been die hard fans since before the cartoon premiered. This brought back some very fond memories of that first week of 3:30 p.m. after school installments. It's an honest to goodness Ninja Turtles movie made with pleasing the fans solidly on its mind, and those fans turned off by the missteps of the first reboot really should give this one a chance. They're likely to leave it feeling a lot more like they got what they wanted, and while it's not the best film in the TMNT franchise, it's not the worst, either, and it's a shell of a good time for those who have a soft spot for the reptilian foursome.The movie is getting accused of pandering, and while it's bombastic and stupid, it's not claiming to be anything else, and it embraces the sense of cheesy fun. For the most part we'd argue that this is more of a case of simply knowing your audience. It's definitely a movie aimed at a very specific crowd, but considering that the last film didn't really have a clue who it was aiming for, is that really such a bad thing?