Book Review: The Age of Treachery 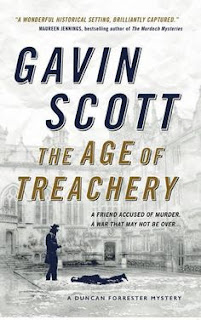 Inspired by scenes of a “snowbound Britain”, and of soldiers returning home to find their country - “cold, dark and broken”, The Age of Treachery by Gavin Scott captures the feel of post war Britain perfectly. The Age of Treachery is the first book in a series of books following the adventures of Duncan Forrester. It’s an entertaining book that I really enjoyed. It’s my first venture into the mystery genre so I am by no means an experienced reader in this area-although I am reluctant to label it anything-let alone a mystery novel-because it’s so much more. It’s a fun read. A book that I could not put down; a real page turner! It has a little bit for fans of mystery, crime, historical fiction, and a dash of thriller fiction. Before I go any further, there may be some minor spoilers. So proceed at your own risk. I figure it would be better for the reader to experience the story on their own.

The protagonist, WWII veteran Duncan Forrester a member of the SOE, begins the story returning home to Barnard College, Junior Research Fellow in Archaeology months after Germany had surrendered. Duncan is a character I could see myself having a drink with. He’s an intelligent, well-spoken man with a past that allows the reader to feel sympathy towards him.

Shortly after a dinner with the High Table, one of Duncan’s colleague’s is murdered and his best friend, Gordon Clark, is the prime suspect. From the first chapter, Scott’s dialogue is easy to read and very realistic-which is not surprising coming from the writer of an Emmy-winning mini-series “Mists of Avalon”, who has in the past also worked with the likes of George Lucas on the Young Indiana Jones Chronicles. The quick back-and-forth’s between characters drew me into the story from the get go. It definitely had the feel of the quick dialogue of a John Ford film. The Age of Treachery is not a heavy read, and from an American POV, the use of native English slang made the story that much more entertaining and believable.

From this point on, Duncan sets out to prove his friend innocent, even though all evidence points to his conviction. This trek leads Duncan to a nightclub in Germany then onto the fjords of Norway, and then back to Britain. Gavin Scott’s depiction of certain scenes is quite believable in such a way that it thrusts you into the middle of the action. Right down to the scarcity of coal and the fact that there are no cars on the road as a result of the war.

Duncan’s investigations lead him to the Eagle & Child pub where he meets with famed authors C. S. Lewis before he had written The Lion, The Witch, and The Wardrobe, and J.R.R. Tolkien while he was writing The Lord of The Rings Trilogy. Later on in the story Duncan also runs into a woman by the name of Margaret Roberts (Thatcher), and then finally Ian Fleming of James Bond fame.

Along with cameos by a few celebrities, and his great dialogue, Gavin Scott creates believable characters (which do include a must-have love interest). Some of which we are never sure if we should fully trust-and you shouldn’t.

What I really enjoyed about this book was how it kept me at the edge of my seat. If you’re like me and a novice of the mystery genre and want to give it a shot, this is a great book to start with. I highly recommend The Age of Treachery by Gavin Scott. 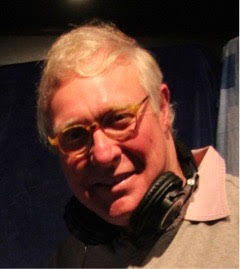 Gavin’s screen credits include work with both Stephen Spielberg and George Lucas and his most recent project with Terry Jones starred Simon Pegg and Kate Beckinsale (Absolutely Anything). Before working in Hollywood he volunteered in the jungles of Borneo working with the children of head-hunters. His travels since have included returning to Britain overland across Asia in 1973, traveling through Sri Lanka, Kashmir, Afghanistan and Iran, and working for the homeless charity Shelter.

I also want to thank Titan Books for the review copy of The Age of Treachery.