We Have a Young Han Solo 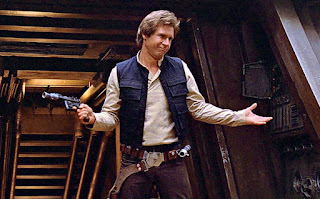 According to The Hollywood Reporter, actor Alden Ehrenreich is in final negotiations for the role of Young Han Solo in the upcoming stand alone Star Wars film from directors Phil Lord and Chris Miller, co-written by The Empire Strikes Back Lawrence Kasdan.
Ehrenreich, one of many actor to read for the role, recently appeared as singing cowboy Hobie Doyle in the Coen brothers Hail, Ceasar!
Personally, I'm good with this. He's not exactly a dead ringer for Harrison Ford, but he was a standout in Hail, Ceasar! and of the actors reported to be in negotiations, he was my preferred choice.  We'll see how it turns out when the film opens in 2018.