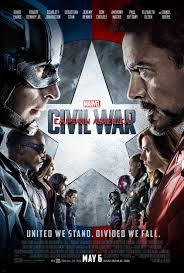 
Generally, we prefer to judge a film on its own merits rather than compare it too directly to its competition, and we certainly don't get into the geek-culture tendency to pit one property or universe against another. That being said, sometimes comparisons are difficult to avoid, and such is decidedly the case with Marvel's Captain America: Civil War following so quickly on the heels of DC launching its own shared cinematic universe with Batman V. Superman: Dawn of Justice. Simply put, Joe and Anthony Russo's comic book clash of the titans covers much of the same ground and touches on many of the same themes as Zack Snyder's did, but this film succeeds spectacularly on nearly every level on which that film fell short. Whether you're looking purely at superhero action or examining deeper themes of the fine line between heroism and vigilantism and wrestling with the tragedy of collateral damage, it's almost impossible not to keep thinking "See, that's how you do it." And taken merely on its own terms, Civil War is a spectacular summer popcorn movie that stands alongside the best films Marvel has made, but is also willing to take big dramatic risks. (And for the record, we love both Marvel and DC, but grew up more on Super Friends, Christopher Reeve, Adam West, Lynda Carter and the DC heroes, and they hold a special place in our hearts, so this is hardly coming from a biased view point.).


As has been widely trumpeted in the film's advertising, Civil War pits Chris Evans' Steve Rogers/Captain America against Robert Downey, Jr's Tony Stark/Iron Man as leaders of different factions of Avengers and pseudo-Avengers due to a UN resolution called the Sokovia Accords, named for the fictional country that was the setting for the heroes' final battle in last summer's Avengers: Age of Ultron. The loss of life from civilians in that and other super smackdowns has left the world wary of power-wielding warriors who operate with no supervision or oversight, and U.S. Secretary of State Thaddeus "Thunderbolt" Ross (William Hurt, reprising his role from the 2008 version of The Incredible Hulk) insists the Avengers agree to U.N. supervision.  Meanwhile, the Winter Solider, aka Captain America's best friend Bucky (Sebastian Stan)  reappears, ramping up the stakes and setting the stage for the serious conflict which has always seemed to be brewing between Cap and Iron Man.

The plot is full of compelling twists and turns, and we're avoiding going into greater detail due to the risk of spoiling anything, and relying on the widely accepted premise that if it's front and center in the film's marketing, as all we've stated so far is, it's not a spoiler. So rather than go any further with specific intricacies of story, we'll simply touch on the many aspects of the film that work so well: while Batman V. Superman merely brooded interminably about the tragedy of collateral damage and the responsibilities of power, Captain America: Civil War gives that issue a human face and a focused, compelling argument in a way Snyder's film could never crystalize. This is driven home by a cameo from Alfre Woodard, who nails her brief scene with a dramatic gut punch that hangs over the rest of the film. And where the motivations of the DC heroes ranged from muddled and silly (Batman) to thoroughly asinine (Lex Luthor), here the filmmakers succeed in making us see all points of view. The question "Are you Team Cap or Team Iron Man?" is a much more complex one than it may appear. Rather than simply being a matter of choosing between favorite heroes, it's a matter of two different surprisingly compelling sides of a weighty debate that resonates with real-world concerns of the proper use of power. We're made to see and understand where every character is coming from.

In an undeniably crowded cast of characters, Evans and Downey take the lead roles, and play them as solidly as we've come to expect. Evans' Captain America wrestles with divided loyalties and his conscience pulling him in a different direction than most of the his teammates, and Evans perfectly plays the humanity of the character, once again making the potentially too perfect Rogers relatable. He takes the nominal lead, but Downey is, predictably, given the showier role, and Stark's internal conflict here pulled us in much more than it did in Age of Ultron. In fact, this may be the most interesting and least self obsessed version of Tony since the original Iron Man.  This feels like more than just another case of Tony's oversized ego causing him to make questionable decisions:  he really is trying to do the right thing just as much as Cap is.

With a supporting cast this big, it's inevitable that some characters will get the short shrift, but everyone at least has their small moments. Paul Bettany's Vision and Elizabeth Olsen's Scarlet Witch are given an opportunity to shine, and though Scarlett Johannson's role as Black Widow is smaller than we may like, she not only once again has the best fight scenes in movies today, but adds a sense of maturity as the closest thing to a balanced voice of reason. We see her here as something of a mother figure to the group, caring about everyone but not being afraid to call them out when needed, and as such is arguably the onext membe the team can not function without. Paul Rudd's Ant-Man is a scene stealer, and Chadwick Boseman makes a very strong and compelling debut as Black Panther. But the film overall is arguably stolen by Tom Holland's Spider-Man/Peter Parker, who manages at once to be a joyously fresh take on the webslinger while emboying everything the character should be. If you hated The Amazing Spider-Man 2 as much as we did (ok, we'll admit, most people don't even hate Nazism as much as we hated that film), you will breathe a sigh of relief at the way Spidey is handled here.

Directors Joe and Anthony Russo (returning from Captain America: The Winter Soldier and soon to helm both parts of Avengers: Infinity War) do admirably well at juggling the drama and action, and in the film's marquee battle of heroes give us a set piece that's every bit as much fun as Joss Whedon's battle of New York from the first Avengers film. Shot with IMAX cameras, the sequence provides the film's best incentive to see the film in the more expensive premium format, and it's certainly worthy of it. And while the Russo's reliance on shaky, hand-held cameras and staccato shutter speeds will no doubt be off putting to some viewers, it adds an immediacy and kinetic energy to the proceedings and (a wicked brutality to the hand to hand combat), and the technology seems to have finally progressed to the point where that stylistic choice can be successfully married with 3D without the worst aspects of both combining to create overwhelming headaches and nausea (at any rate, it certainly worked for us. There will always be those who have a complaint.).

Captain America: Civil War is undeniably crowded and runs just a tiny bit too long, but it juggles its character and plot threads well and always keeps moving, and it very nearly accomplishes the daunting task of keeping it's title character at the forefront while still doing appropriate service to its enormous cast. It shows us again that Marvel is so dominant not just because of Disney's powerful marketing, but because they simple know how to make a blockbuster that works both for fans and casual moviegoers. It's sure to be one of the biggest hits of summer 2016, and deservedly so. For parents who are unsure whether or not to take their kids, it should be appropriate for most audiences 10 or older, or any kid who has been able to handle the earlier Marvel films, with the possible exception of one disturbing (if not at all graphic) sequence of brutal violence toward the end of the film. 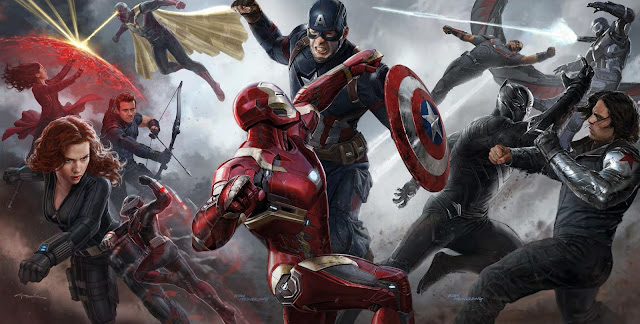