Movie Review: "Money Monster" Is Better as Thriller Than Satire 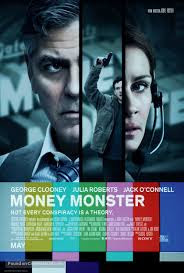 Jodie Foster the director is much like Jodie Foster accepting a Golden Globe: she certainly has something to say, but it would be sufficient to say it just once,  and she should avoid going off on tangents or drinking before hand.

Money Monster is her first attempt at a commercial thriller, and she proves quite capable in the genre. But it's an uneven film full of parts that don't always mesh together, and it's not nearly as thought provoking as it wants to be. 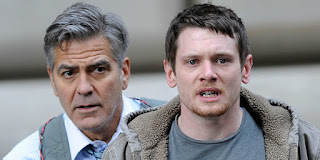 George Clooney stars as Lee Gates, a very thinly disguised variation on Mad Money host Jim Cramer. Gates hosts a TV financial advice show called Money Monster  (hey, that's the title of the movie!) where he mixes obnoxious antics like hip hop dancing with dispensing investment tips. He has an antagonistic relationship with his producer, Patty Fenn (Julia Roberts) and most of the crew due to his oversized ego. But just as his latest show is about to go live, Gates is held hostage in the studio by Kyle Budwell (Jack O'Connell), an angry, working class young man who lost $60,000 to a bad tip from Gates' show.

Money Monster alternates between thriller and satire, and it pulls off the former better than the latter. Foster's direction is taut and well-paced, though for the first half of the film our lack of empathy for Gates makes it hard to feel the tension. But when it kicks into gear, this is an effective suspense film. But as a satire, it's a mix of being too heavy-handed and not having enough to say, and occasionally it veers off into comic relief tangents that don't really work. The preachiness would be easily excused if the film were more insightful, but it never seems to really get there, settling instead for obvious conclusions and simple solutions. 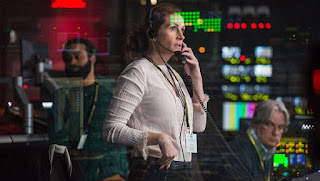 The film's biggest strength is its cast: Clooney makes up for his lack of creditibility in the early sequences ( he simply isn't obnoxious enough to pull off the dancing and other tacky elements of Gates' brand of showmanship) as the film goes, and provides an immediacy and sincerity that pulls in the viewer (even if the character's arc is less than entirely believable.). O'Connell continues to show that he's one of the most promising up and coming actors out there with his intense and sympathetic performance as Kyle, and Roberts holds the film together just as her character holds the show together. The role is underwritten, but her charisma and believability never falter (even when she has to choke out lines like "You're a producer: produce your way over there!") and more often than not she really is carrying the film, giving us the only character we always feel we can root for in this story. In all honesty, the movie is well worth sitting through just to enjoy watching Roberts, who only improves with age, and someone really needs to find her a Gravity style star vehicle worthy of her presence as soon as possible. Character actor Lenny Venito also gets a chance to shine as a dedicated camera operator.

In the end, Money Monster falls far short of the classics it emulates ( in particular Dog Day Afternoon) and fails to be the searing indictment of the American financial system it wants to be. But it's a solidly entertaining and well constructed thriller bolstered by strong performancee from a stellar cast, and there's something inherently refreshing in this day and age about seeing a grown up, light on the FX, actor-driven movie released in the summer.