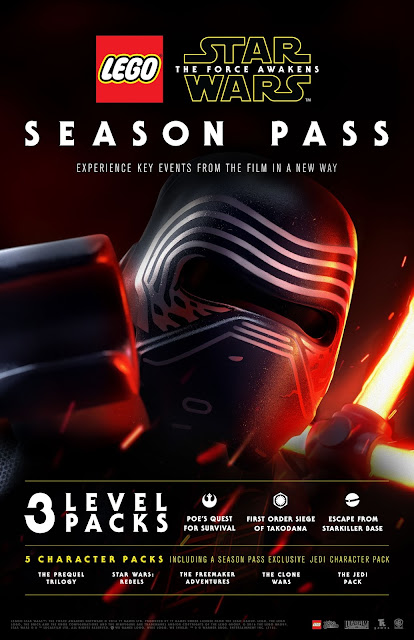 Warner Bros. Interactive Entertainment today announced further details on the LEGO® Star Wars™: The Force Awakens Season Pass, which grants players access to a variety of downloadable content (DLC), including new game levels and story-driven content, as well as additional characters from across the Star Wars ™ galaxy.
The Season Pass features three brand new Level Packs that extend the LEGO® Star Wars™: The Force Awakens adventure with exciting new content not seen in the movie. Each add-on pack will allow players to experience key events from the film in different ways, including Poe Dameron’s journey back to the Resistance base after crash landing on Jakku, the assault on Maz Kanata’s castle through the eyes of Kylo Ren and the collapse of Starkiller Base from the perspective of two Resistance pilots. The Season Pass will also include five Character Packs featuring well-known Star Wars™ heroes, villains and Droids.
The LEGO Star Wars ™: The Force Awakens Season Pass will be available for £7.99 on PlayStation®4, PlayStation®3, Xbox One, Xbox 360 and Steam (Windows PC). Players can also purchase each DLC Pack individually for £1.70 for Character & Vehicle Packs and £2.50 for Level Packs. As an added bonus, Season Pass holders will gain exclusive access to TheJedi Character Pack, which will be available at launch on June 28, 2016. For the timing and release of all other DLC content, keep an eye on the LEGO ® Star Wars™: The Force Awakens Twitter, Facebook, Instagram and YouTube channels for details.
Players can now pre-order the LEGO ® Star Wars ™: The Force Awakens Deluxe Edition on PlayStation 4 and Xbox One for £57.99, which includes the main game and Season Pass, as well as early access to The Empire Strikes Back Character Pack.
A complete breakdown of the Season Pass content is included below.

Poe’s Quest for Survival Level Pack
·         A whole new adventure following Poe Dameron’s journey back to the Resistance base. After his daring escape from the First Order that left him stranded on Jakku, Poe must search for BB-8 and locate a ship to escape the desert planet in an effort to find his way home.
·         Playable characters and vehicles include: Naka Lit, Ohn Gos, Poe Dameron (Jakku),Strus Clan Leader, Strus Clan Raider, Strus Clan Speeder (Full-size Vehicle), Strus Clan Speeder (Microfighter Vehicle)
First Order Siege of Takodana Level Pack
·         Experience the thrilling assault on Maz Kanata’s castle in a new way. Storm the shores of Takodana with Kylo Ren and the First Order in a quest to capture Rey and BB-8 to crush the Resistance forever.
·         Playable characters and vehicles include: Jashco Phurus, Rosser Weno, Strono "Cookie" Tuggs, Thromba, Laparo, Jakku Freighter (Full-size Vehicle), Jakku Freighter (Microfighter Vehicle)
Escape from Starkiller Base Level Pack
·         After crash landing on the surface of Starkiller Base, join the battle from the perspective of two Resistance pilots. With the help of a loyal astromech droid, outmaneuver the First Order to escape the planet before it explodes.
·         Playable characters and vehicles include: C'ai Threnalli, Colonel Datoo, Lieutenant Rodinon, Lt Wright, R3-Z3, Assault Walker (Full-size Vehicle), Assault Walker (Microfighter Vehicle)

” are both trademarks of the same company. All other trademarks and copyrights are the property of their respective owners.