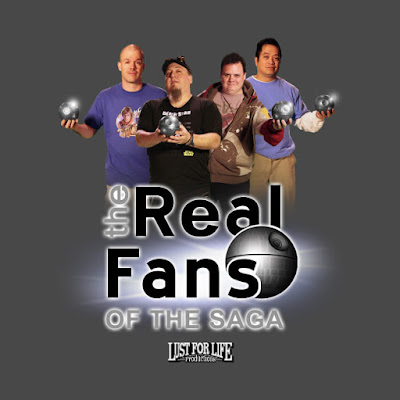 The Force Among Us filmmaker/ documentarian Cris Macht is releasing a Star Wars Fan Reality Show – The Real Fans of the Saga. The web series will be launched this summer and is approximately 12 plus episodes (around 20 min. in length). The debut season of the show follows the lives of four passionate and diverse Star Wars fans during the Year of 2015 through the release of The Force Awakens.

The Kickstarter Campaign for the Project was launched May 25th.

The Link for the Campaign is here The Real Fans Of The Saga - A Star Wars fan reality show!

This will be the 3rd project that Filmmakers Cris Machthttp://www.imdb.com/name/nm5277601/?ref_=fn_al_nm_1 and Ian Vacekhttp://www.imdb.com/name/nm3051870/?ref_=fn_al_nm_1 produced together.
After making 2 critically acclaimed Star Wars documentaries, Filmmaker Cris Macht wanted to do another Star Wars related project. Cris' wife loves reality TV as much as he loves Star Wars so he had the idea and inspiration to do a "reality style" project based around Star Wars fans!
Cris was also very inspired by passionate "conversations" he had with fans while making his 1st 2 Star Wars documentaries. he found it difficult to capture the "conversations" in the documentaries due to subjects being a little nervous while being interviewed - While filming the reality show - THE REAL FANS OF THE SAGA....it was much easier and "natural" to capture this!
The Real Fans project was filmed at the start of 2015 and followed 4 completely different fans (that are friends)  to Celebration Anaheim all through well over a year (including leading up to The Force Awakens and after it's release).
Each Episode will be 15 - 30 mins (actual time per episode TBD after editing) and there will be approx 12 - 17 episodes total (again, TBD while editing)
Expect to see all the elements that make a reality show fun! Drama, Emotion, controversy, Hijinx, in depth conversations, confessionals, and music (by John Delvento ,http://www.imdb.com/name/nm5816686/?ref_=fn_al_nm_1) - Just to name a few!
WHAT YOU GET - another great product from Filmmakers Cris Macht and Ian Vacek

The Risks and Challenges are always financial. When you don't have enough....you can only do so much, when you have more financing avail, you can do more. The FIlmmakers Produced this project and put their own money into it. But honestly, It is difficult to mention what the risks and challenges are because Cris Macht has already released 3 documentaries (2 of them successfully funded through kickstarter - the first one he funded on his own!). The Real Fans project has already been filmed, except for the confessionals and is in the Post Production/ Editing process. Not only will your financial contribution get you some cool perks but it will help reimburse the filmmakers the expenses that they have covered, as well as paying for post production costs - ESPECIALLY EDITING! If the goal is not met - it will be difficult to release the project as it will be a financial burden during post production. Cris and Ian believe (along with their fans) that all their productions are made for the fans by the fans -YOUR support is vital!
The Bearded Trio - The Site For Steven Spielberg, George Lucas and John Williams
THE BEARDED TRIO ON FACEBOOK
THE BEARDED TRIO ON TWITTER
THE BEARDED TRIO ON GOOGLE+
THE BEARDED TRIO ON PINTEREST
CLICK HERE FOR FACTS ON STEVEN SPIELBERG
CLICK HERE FOR FACTS ON GEORGE LUCAS
CLICK HERE FOR FACTS ON JOHN WILLIAMS