Friends of the Park Halt Lawsuit on Lucas Museum. 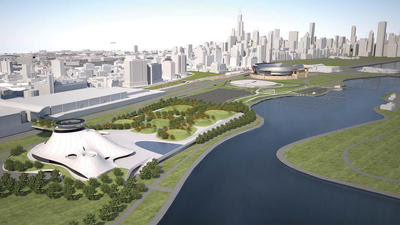 Friends of the Parks has taken the advice from city officials and suspended its lawsuit against the proposed Lucas Museum on Chicago's lakefront, the group announced Tuesday.  The nonprofit group said "(the decision) gives all parties the opportunity to have a more direct and productive dialogue to reach a potential solution about a museum site."

It said it has informed U.S. District Court Judge John Darrah of its decision but added that it could restart its lawsuit, if necessary. City officials asked the group to put its lawsuit on hold and the group said it agreed "because the city is now prioritizing another site" for the museum. Darrah will consider the request next week.

Friends of the Parks claims that the museum will violate the public trust doctrine, which holds that governments are obligated to protect certain natural resources, like the formerly submerged lands along Chicago's lakefront, for the public's use.