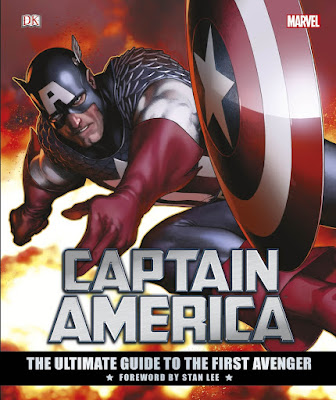 This is a review of Captain America: The Ultimate Guide to the First Avenger by Matthew Forbeck

Full Disclosure: I didn’t grow up reading Captain America comic books. My Mom would let me pick up comics from time to time — usually if I was sick so I’d have something to read while convalescing — and on occasion I would choose Cap. Or Star Wars. Or Spider-Man. Or Archie. It varied, but was by no means a regular thing for any of those titles. My love for Captain America was largely birthed via the Marvel Cinematic Universe. Some might say I’m not a “real fan” of the character due to that fact. I hope most understand my affection for Cap is true, in spite of my limited historical knowledge.

All this leads to me to why I pleased to have the opportunity to review Marvel’s Captain America: The Ultimate Guide to the First Avenger. I wanted to see what it would be like coming at the book with a very loose understanding of Cap’s comic book origins. How informed would I feel after reading the book? Would I understand the connections between the comics and the events presented in the MCU? I’m happy to say the answer to those questions is a resounding YES! Not that I’m am expert, but as far as crash courses go, author Matthew Forbeck has presented a wonderfully educational tome — for both newbies and veterans.

The book is presented in an easy-to-read manner, with lavishly bold illustrations from the comics throughout, including several two-page spreads. It is sectioned off by decade — from the 1940s through the 2000s — as it explores the highlights of Cap’s adventures. Given the 75 year history of Captain America, the book can’t possibly cover everything, but certain storylines and key characters — enemies and allies — have their time to shine in the spotlight.

On more than one occasion, Steve Rogers set aside the mantle of Captain America, for varied reasons — some by choice and some not — so there are numerous iterations of Cap over the years. All receive their due, but Steve is the primary focus, from frail patriot to super-soldier. Cap came to embody the very best of the United States of America — what we could, and should, always be. 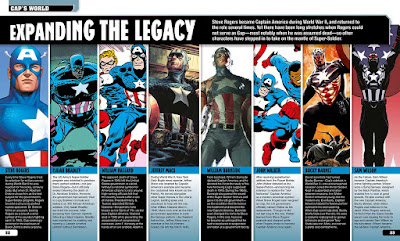 The Ultimate Guide clocks in at 200 pages, and features a foreword by the legendary Stan Lee. While not the creator of the character — that honor goes to Jack Kirby and Joe Simon — a young Mr. Lee was certainly a presence in those early days.

The intended audience is young adults, but its appeal is much broader. Fans of all ages with even a casual interest in the subject matter will be enthralled. There is a comprehensive multi-page timeline that makes an excellent quick reference guide, as well as an thorough index.

Being a fan of the MCU first, I was interested to see how and where the comics fit in relation to the films. Yes, there are obvious and necessary deviations from the source material — but I was amazed at how much was pulled from the comics and woven into the fabric of the films. Not just for Captain America: Civil War, but also for The First Avenger and The Winter Soldier. It almost seemed, from things I had read online, that the comics didn’t play much of a role in the development of the films, or that the films strayed too far — but, in my opinion, that couldn’t be further from the truth. I had quite a few eye-opening moments as my mind made connection after connection. I now rest assured the legacy of Captain America in comic book form is alive and well in the Marvel Cinematic Universe.

From the early days of Timely Comics, to the modern-day empire that is Marvel, Cap has been a mainstay, and Captain America: The Ultimate Guide to the First Avenger is a fitting star-spangled tribute. #TeamCap forever!

Thank you to DK Publishing UK for providing a copy of this book for review purposes.