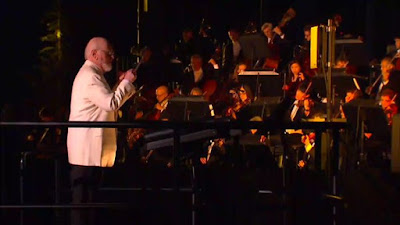 The Wizarding World of Harry Potter has officially opened at Universal Studios Hollywood, and John Williams -- composer of the first three films in the Harry Potter franchise -- was on hand to conduct the Los Angeles Philharmonic for the opening ceremonies. Members of the cast were on hand as well, including Warwick Davis, Evanna Lynch, Tom Felton, and James and Oliver Phelps. Even Steven Spielberg was on hand!

The full video of the grand opening can be seen below. Williams wraps up the ceremonies with the LA Philharmonic accompanied by the grand fireworks finale. Enjoy! (John Williams comes in @24 minutes into the video)