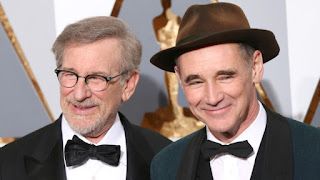 Steven Spielberg has made the surprise announcement of Ready
Player One, the Oscar winning director will return to historical drama for The Kidnapping of Edgardo Mortara, starring Bridge of Spies and BFG alum Mark Rylance and written by Munich and Lincoln scribe Tony Kushner.
another filming his already busy directing schedule. After finishing production on his upcoming adaptation of Ernest Cline's popular novel

Acording to The Hollywood Reporter, Spielberg will shoot the film in early 2017, with plans for a release in Oscar season of the same year, which would actually have it beating Ready Player One into theaters. While this would certainly be a tight schedule, Spielberg has done it before, notably with a similar quick turnaround for Munich in 2005.

The Kidnapping of Edgardo Mortara is based on a  1997 non-fiction novel by David Kertzer, which chronicles the story of a six-year old Jewish boy in 1858 Italy who was removed from his parent's home by Vatican authorities and raised as a Catholic. The case became famous world wide.