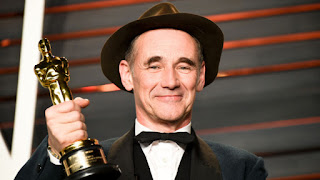 Bridge of Spies Oscar winner Mark Rylance apparently wasn't kidding when he said he'd do any film Steven Spielberg wanted him for at this point. According to Variety, Rylance (whom turned dpwn in a role in Spielberg's Empire of the Sun back in the 1980s and has apparently decided to spend the rest of his career making up for it) has now joined the cast of Ready Player One, in the role of James Donovan Halliday, creator of virtual world the Oasis. Coming two days after it was announced Rylance would appear in Spielberg's upcoming historical drama The Kidnapping of Edgardo Mortara, this means Rylance will appear in major roles in four consecutive Spielberg films (Bridge of Spies, The BFG, Ready Player One and Edgardo Mortara. This is unprecedented in Spielberg's career. Can we expect Rylance to show up in Indiana Jones V?