Movie Review: Jon Favreau's "The Jungle Book" Has All The Bare Necessities For a Great Movie 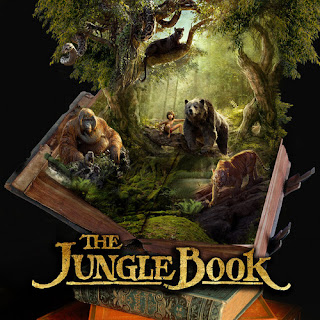 Disney's new trend of live action nods to animated classics got off to a very rough start with the dreadful Maleficent, which was not without some interesting ideas  (most of which didn't work) but it fell flat on its face in no small part due to a director, Robert Stromberg, who, to be fair to him, was an Academy Award Winning production designer, but clearly was not ready to direct a feature film on that scale. Sure, it looked beautiful, but it had the clunkiest pacing I've seen in a movie in quite some time, and the actors all seemed as if they were in a free for all, either directing themselves to over the top performances or just giving up entirely. Thankfully, Disney fared much better the second time around with Kenneth Branagh's utterly delightful version of Cinderella, one of last year's most welcome surprises, largely because the veteran director left his signature all over it.

It may be completely coincidental that Disney's followed the Thor director's take on an animated classic with one from Iron Man's Jon Favreau, but then again, maybe not. Either way, the guys who really got the Marvel movies off onto the right footing have done it again with this new venture, and Favreau quickly reminds us that if he's trusted to be himself, he's one of the best blockbuster directors currently working (somebody get this man a Star Wars movie.).

The story of the orphan boy, Mowgli (played here by newcomer Neel Sethi), who is raised by wolves in the jungles of India, has served as a source of inspiration for everything from Tarzan to the Cub Scout program, and Disney's 1967 animated version holds a very special place in my heart, because it's literally the first movie I ever saw in a theater, and as such I've always had a hard time warming up to versions that try to go for the more serious and often intense tone of Kipling's original work. But Favreau and writer Justin Marks find a simple but surprisingly fresh angle here by mixing the best elements of the Disney and Kipling tones with a telling of the story that reincorporates some key story elements from the author's work, including adding back a surprising amount of that intensity, while still remaining true to the fun and warmth of the animated classic.

The visual effects on display are beyond stunning, using a mix of motion capture and more traditional CGI, the Weta team has created the most amazing talking animals ever seen on screen. There are moments where it is very hard to wrap your head around the idea that you are not looking at real animals. And the performances are all excellent, with young Sethi making a very endearing Mowgli, and Idris Elba making for a complex and frightening, but not entirely unsympathetic Shere Khan, But yes, as we all expected, Bill Murray's Baloo makes the movie, as he gives us by far the best traditional Bill Murray performance since Groundhog Day without ever betraying the character. Baloo alone was enough to make me laugh, cry and cheer, and he's perfectly backed up not only by Ben Kingsley's Bageera but by Marks' clever dialogue. Giancarlo Esposito and especially Oscar Winner Lupita N'yongo add a very touching element with their portrayals to Akela and Raksha, respectively, and Christopher Walken's take on King Louie is mesmerizing,

I can't say enough about how much I loved this movie, and frankly the summer has an extremely tough act to follow. When you combine this with Zootopia, Disney has gotten their year off to perhaps its best start ever in the history of the most famous name in family entertainment, which is no small statement. It is important to keep in mind the word intensity, however. There are jump out of your seat moments here that are up there with the best Jurassic Park scares, so this probably isn't a good idea for anyone under six years old.

But the rest of the family should be completely enthralled.

The Jungle Book opens in theaters across the U.S. and U.K. on April 15.