A Few Thoughts On The "Rogue One" Trailer 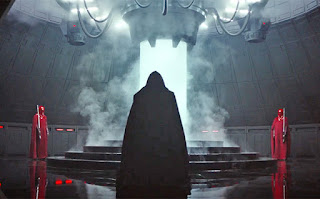 With the release of the first teaser trailer for Star Wars: Rogue One this morning, the internet is immediately abuzz with speculation and theories. This is to be expected, and is fun. I'm here to offer a few thoughts of my own.

The protagonist, played by The Theory of Everything Oscar-nominee Felicity Jones, is the subject of the most rampant theory/rumor: Jyn is the mother of Rey from The Force Awakens. One one hand, this is an intriguing theory, and while Rogue One has been proclaimed to be a stand-alone separate from the new trilogy, it's not at all far-fetched to think that Lucasfilm might be pulling something sneaky on us by slipping Rey's backstory into the first spinoff film (I'd suspect it more strongly if J.J. Abrams were acting as an executive producer on Rogue One, as this is clearly a J.J. kind of thing to do.). And there are at least some superficial similarities between the two: both are slight of build and speak with British RP accents, and Jyn is revealed to be a loner who has lived on her own most of her life, much like Rey. 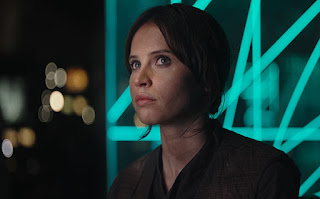 But let's not get too far ahead of ourselves. Pretty much every woman in the saga except for TC-14 has been speculated as being Rey's mother (not long ago everyone seemed certain it was Laura Dern's character from Epsiode VIII). And the similarities could easily be coincidental. After all, dark hair is not incredibly distinctive, Hollywood tends to prefer actresses who are slight of build, and a British RP accent isn't hereditary. And is it really that big a deal to have two different female protagonists? It's never seen as all that big a deal to have multiple male protagonists. As Lucasfilm creative executive Pablo Hidalgo tweeted today, "For dudes concerned about keeping Rey and Jyn straight in your minds, use the same flashcards/mnemonic devices that helped you figure out Luke & Han."

That said . . . Jyn being Rey's mother is an intriguing possibility that should not be dismissed. It just shouldn't be taken as a foregone conclusion, either. 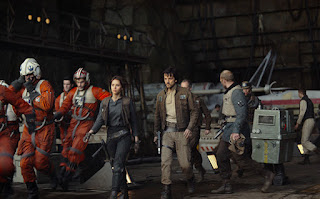 For me the most appealing aspect of the trailer is how perfectly production designers Doug Chiang Revenge of the Sith gave us a look that seemed on the verge of becoming full on 1977 Star Wars and The Force Awakens, the place in the timeline occupied by Rogue One requires an exact return to that aesthetic, and they nailed it. Even the lighting in the Rebel base where we see Jyn talking to her superiors is exactly right.
and Neil Lamont have re-created the look of the original 1977 film. Where 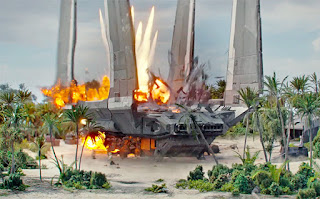 Where The Force Awakens trailers stirred our emotions with tender moments between beloved Rogue One goes for something much different. As promised by director Gareth Edwards, this a grittier Star Wars film with no Jedi, and it's more of a war film. The heroes and villains are less clear cut. The trailer backs him up on this with Forest Whittaker's "What will you become?" monologue to Jyn. While it's exciting to see the possibilities opened up by these stand-alone anthology films, ithe remains to be seen how audiences will accept a Star Wars film that doesn't feel like what we've expected one to feel like for almost 40 years now.
characters and invoked the spirit of the Force,

Is that Alan Tudyk?

The Firefly star is supposed to be playing a motion capture role. Is it the skeletal Droid we briefly see? Hard to say, but it's a reasonable guess.

For the first time, a live-action Star Wars film isn't being scored by John Williams.  Oscar-winner Alexandre Desplat is a great choice. Is that music from his score? And will we hear snatches of John Williams themes in the film like we do in the trailer? Or will Desplat avoid them and try to create something different. 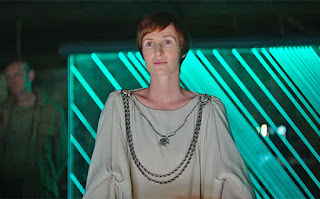 Revenge of the Sith, one which was never seen in theaters but made it to the DVD extras. It's nice to see her given another opportunity and to see so small a connection respected.
It's exciting enough to see Rebel Alliance leader Mon Mothma in the trailer.  The confirmation that the actress is Genevieve O'Reilly is a delightful example of respect for the continuity of the entire franchise. O'Reilly played the role in a deleted scene from


All in all, the Rogue One trailer is more reason to be excited about the Star Wars films ahead. Edwards is an extremely talented director, with a great deal or skill for guiding the camera and building excitement and suspense. I'm looking forward to December 16 all the more now. 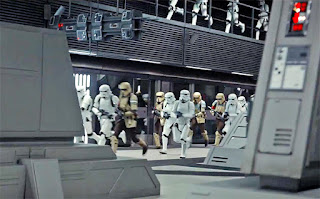