By Unknown March 24, 2016
How a Long Time Ago I Went Back in Time to a Galaxy Far Far Away

I have had the pleasure of partaking in two in theater movie marathons in my life. Both were pretty opposite on the length spectrum.

The first I experienced was Back to the Future. In October I settled into a theater with thirty some strangers and my wife to watch the trilogy of Back to the Future films back to back. All together the three movies reach just under six hours, so with breaks and all we were in the theater for over six hours. The crowd was small but enthusiastic. These films were such a huge part of my childhood, it was great to see them on the big screen for the first time. This was a cake walk in comparison to what was ahead of us. 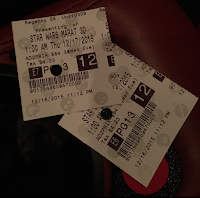 There had been rumors of a Star Wars marathon leading up to Episode VII. Fast forward to when it all started on October 19th This was a trying evening. The AMC website was not even remotely ready for the stampede of Star Wars fans. It took us two hours of obsessively reloading and using multiple browsers before we finally secured our two marathon event tickets. Needless to say, it was worth it. The hype at the time was unbelievable. Right when we finished our purchase the trailer debuted on TV. Let me tell you, that trailer got the juices flowing. If you didn't get super amped after seeing that, you were a lost cause. If you need to be reminded of its epicness, watch it again: 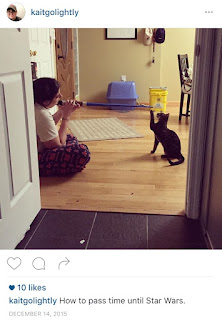 The Force Awakens was a major enigma up to this point. We had teasers to watch and an excellent Comic-Con Reel. This trailer gave us a glimpse into our favorite universe and where it stood at this new point in time. 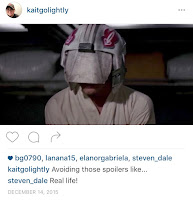 Couple this with the purchase of our marathon tickets, I was on cloud nine. I had seen the prequel films in theaters, but not the originals. The thought of seeing the original three on the big screen gave me butterflies. Waiting the two months was a task. Hardest being the three days leading up to it when I was on a self imposed internet embargo the Monday of that week in a (successful) attempt to avoid spoilers. 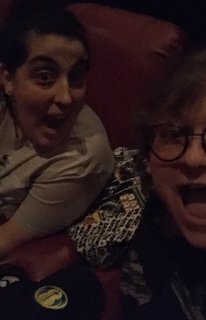 After training our bodies with some weird sleep patterns (staying up as late as possible the two nights before and taking day time naps) we were ready to head out. The nearest AMC Star Wars Marathon Event to us was in Jacksonville, about an hour and a half drive from home. So we packed up our things (we booked a hotel for the night after, we knew we'd be in no condition to drive) and headed towards our big day. We ended up getting to Jax early and toiled around a Target for awhile before heading to the theater.

Sadly, we were an hour and a half early for the 1am start time and just decided to go in. Glutton for punishment. What a bunch of lunatics, we were already agreeing to be in this theater for twenty hours so we clearly needed to add an additional hour or so. The excitement was unreal though. We were not the only ones early. The crowd was a mixture of young and old. Some were in pairs, some were families, and a few lone souls by themselves. It was cool to see how the Star Wars universe really brings together people of all walks of life together. We found our (assigned) seats and started to set up shop for the day ahead. Our two bags, blankets, and sweatshirts found their way in between the seats. In between movies everyone left their crap where it was, kind of like unwritten campground rules. 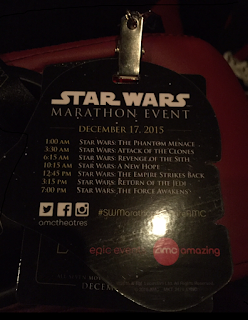 Full disclosure: I like the prequels. I know they are immensely flawed films but I find them to be really entertaining. They were my childhood and the nostalgia probably plays into that. Despite my acknowledgement of all of that, I still think some of the performances (most notably Ewan McGregor as Obi-Wan Kenobi) and the background story leading up to Episode IV is a great thing to witness. Despite me having seen them in theaters (I was 8, 11, and 14 at their release) I was very excited to see them with fresh eyes in theaters again. What stuck out to me most was Revenge of the Sith this time around. 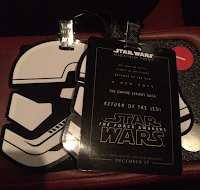 I had never been a huge fan of the movie but it quickly vaulted up in my rankings! That movie is a really incredible experience, especially the Obi-Wan/Anakin fight at the end. My wife snoozed on and off throughout the first three. I stayed pretty strong through the prequels. After Episode III I was beginning to drag a little. This was the longest break of the day. We got some food and tried to snooze a little. 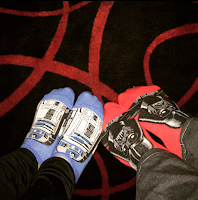 The original trilogy was somewhat hard to get through solely based on how sleepy I was. At that point I had been awake for roughly seventeen hours. I would be lying if I said I hadn't dozed off for five or ten minutes here and there but mostly I stayed strong. Seeing this trilogy of stories that I'd seen a hundred times on the big screen for the first time was a very cool experience. A few parts that stood out to me: the brightness of Tatooine and the depth of the trenches of the Death Star in A New Hope; Hoth and the Duel on Bespin in the Empire Strikes Back; and Endor in Return of the Jedi. It was like visiting these planets unlike I ever had before. In particular, I felt like I had waited my whole life to see the beautiful scene of Luke and Vader fighting in TESB. It is something I'll never forget, it made me feel like a kid 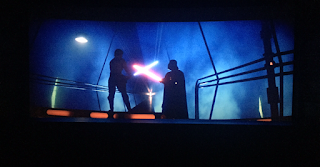 again. My mom worked at the church we attended when I was young. During the summer I'd go to work with her and waste away my days roaming the halls of the office building. The youth pastor had all three original trilogy films on VHS. Most of my time was spent laying on the tables in the worship hall (fancy words for place to eat and have meetings) watching these movies on a giant CRT TV cart I'd roll out.


After the originals finished up you could feel the buzz in the room. After years of waiting we would finally get to see Episode VII! The hour and a half in between Return of the Jedi and the Force Awakens crawled by. We crushed some Five Hour Energy, they probably don't work but whatever. Up to that point we had been taking caffeine pills and I was waiting for me to have a full blown Jessie Spano breakdown...

As anticipation grew the chatter from the others in the room began to build. When the lights finally dimmed and the familiar Main Title began to play, it was like coming home. All of the fatigue we were feeling vanished and we were immersed in the universe that had been kind to us for so long. The crowd was tremendous. We cheered, laughed, and cried together while hanging on each moment. I'll never forget the thunderous applause when they showed the Millennium Falcon for the first time. The reality of it all now, is that I absolutely adored the Force Awakens. While it is blasphemy to many, it is probably my favorite of the saga. (My ranking is for another time.) 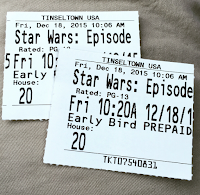 We would go on to see TFA nine times! We actually got three viewings in within the first 24 hours. Laying in bed at the hotel that night, basking in the awesomeness of the movie, we got on fandango and bought tickets for 10:20 early bird showing the next morning even though we knew we had tickets for that evening at home with family. But that is what it was all about for those few days. It was a state of being.

I've found myself going back to those few days in my mind lately. It is strange to be so nostalgic for a time only four months ago but I am. It was like being in your own world for a few days full of excitement and hope. I truly recall that long weekend as a life event, one that I'm so happy to have shared with my wife. It was her time seeing any of the Star Wars films in theaters. It is unbelievable to have someone to share your passion with, someone who respects them. I close my eyes and I see us driving back from Jacksonville, drinking some DD iced coffee, taking back roads home to enjoy the Florida scenery and discussing what lies ahead. Who is Rey's parentage? Where will this saga take us next? We wont know for awhile, until Episode VIII and IX are released and the trilogy wraps up. What I do know is that I'm excited for this quest to continue and to be a part of it. 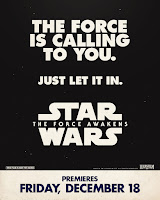