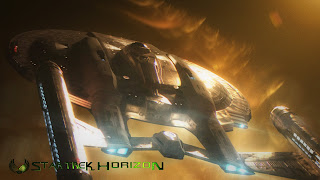 Star Trek - Horizon is a feature-length fan film made by a single filmmaker as a personal passion project and love letter to Enterprise, the fifth Star Trek series. Pre-production began in December of 2012 and this 3-year-long odyssey concluded on February 25th, 2016. It's been a long road, getting from there to here.
The Coalition of Planets, a young alliance of worlds led by Earth, is at war with the Romulan Empire. Desperate for a chance to gain the upper hand in the war, the Coalition forms an alliance with T'mar, a Romulan deserter, in the hopes that she can provide valuable intelligence on her former masters.
LINKS:
startrekhorizon.com
facebook.com/sthorizon
tommykraft.com
STAR TREK and all related marks, logos and characters are owned by CBS Studios Inc. "Star Trek - Horizon", the website, the promotion thereof and/or any exhibition of material created by Project [N] ReSource Films, Tommy Kraft, or the "Star Trek - Horizon" team are not endorsed or sponsored by or affiliated with CBS/Paramount Pictures or the STAR TREK franchise.