Movie Review: Smart and Funny "Zootopia" Is an Instant Classic 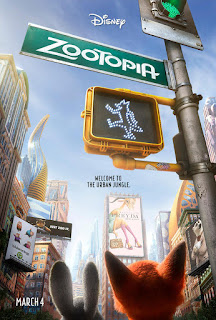 We would like to humbly suggest that, with the release of Zootopia, it's time to stop saying that the latest Disney animated feature feels more like Pixar than Disney. At this point, the difference between the two studios is very little. And yes, that is a huge compliment.The Disney titles have come a long way from the days when they seemed to be the weaker sibling to the Pixar films, and Zootopia is an unqualified triumph that works as a comedy, a mystery and a surprisingly thoughtful story about tolerance that never feels preachy or heavy-handed.

The story begins with a young rabbit named Judy Hopps, who wants to be a police officer when she grows up (pop culture junkies like us will recognize the play on the name of Holly Robinson's 21 Jump Street character). In order to do this, adult Judy (voice of Ginnifer Goodwin) moves to Zootopia, a city where an animal can be anything he or service wants to be . . . Or so Judy 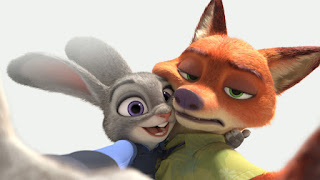 has been told. In reality, the animals of Zootopia have their prejudices and sterotypes like anyone else, and Police Chief Bogo (voice of Idris Elba) relegates Judy to parking duty, regardless of her finishing first at the academy. But when several animal mysteriously disappear, Judy is forced to join forces with a charismatic but shifty con artist fox named Nick Wilde (voice of Jason Bateman) to solve the mystery.


Zootopia works on a lot of levels: as a cute kids movie, as a comedy that will be funny to adults, as a buddy cop movie, and even as an exploration of race relations in modern society, using the distrust between predators and prey as its metaphor. But if you're the type of person who gets outraged about Hollywood putting political messages in children's films, there's really nothing to get in a twist about here.  The film can easily be enjoyed purely at surface level as a story about talking animals without even getting into the racial subtext. And from our perspective,  we can all use a reminder to treat each other better. 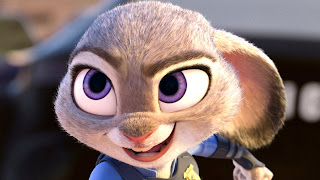 The cast is uniformly strong, with Goodwin and Bateman playing perfectly off of each other.  Goodwin makes Judy a lovable protagnist who is easy to relate to, and Bateman makes Nick arguably the best role he's had since Arrested Development.  Rather than being simple, two dimensional character types loke you might expect in a cartoon or a Hollywood blockbuster, these are multi-dimensional, fully rounded characters. And they're joined by an excellent supporting cast, which not only includes Elba's gruff chief, but also Oscar-winner J.K. Simmons as Mayor Lionheart, Bonnie Hunt and Don Lake as Judy's lovably clueless parents, and a hilarious cameo by Tommy Chong. But above all else Zootopia is a great story that keeps you involved from beginning to end. The mystery is far more engaging and interesting than you would think, and the buddy cop dynamic is a whole lot of fun. And of course the animation is first-rate, as is Michael Giacchino's musical score (there are no Frozen style musical numbers, but there is a song by Shakira as an animal  pop star Gazelle).

The film is also of particular interest for cinephiles, as it's full of influences and references to classics ranging from Who Framed Roger Rabbit? to The Godfather. Even if you don't catch the references, these influences contribute to making this a film that's far more intelligent and sophisticated than the vast majority of Hollywood fare currently being marketed to adults. Yet all of these sophisticated references and themes never stop the film from working as joyous animated fun that will delight children.

This is a film for all audiences to see and enjoy, and is sure to join  the long list of beloved Disney animated films kids will watch over and over again, but which are also highly entertaining to adults. It's a rare film that manages to work as escapist entertainment while simultaneously provoking deep soul-searching thought, all while being suitable for the entire family. It's a great movie, and worth rushing out to see.