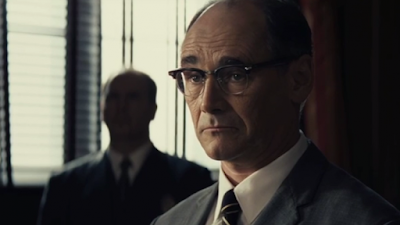 MARK RYLANCE Q and A

1. Tell us about the character you play?

A. I play Rudolf Abel, a Russian spy who was captured and arrested in America. We don't really know all that much about him, other than the fact that he received and passed on messages at various drop sites throughout New York using a hollow coin. He was hiding out in a kind of bohemian artists' warehouse in Brooklyn with all of these young guys who were what you would call, “left of center.” Eventually, the New York Bar Association gets an insurance lawyer, James Donovan, played by Tom Hanks, to agree to represent Abel, knowing that he was involved in the Nuremburg Trials and had some knowledge of foreign matters like this.

2. Did you find it liberating to play a real person?

A. Playing a real person can help you draw out a particular side of yourself, but Abel is a mysterious character. There are not any actual recordings of his voice, so I based his accent on other people’s descriptions, but there is a brief clip on YouTube of him being led from a truck into a courtroom which provided me with some nice physical aspects to play with, like his
stance, which was almost hawk-like. Unfortunately, I don't have his wonderful nose and I’m not quite as thin as he was.

3. Tell us about the time period in which the story takes place, as well as the political climate of the time.

A. This is a true story, and the events that open the film took place in 1957. It was a dangerous time when the U.S. government thrived on frightening its citizens. When Abel was captured, the country was in a frenzy and everyone was convinced he should be executed for his crimes, and, in fact, there is a scene in the film where members of the public present at Abel’s trial become very angry when his sentence is read. But Donovan’s argument had always been that this was not treason, because Abel was never an American citizen, but a professional spy doing his patriotic duty for his country, and it is Donovan’s brilliant assertion that no matter who the enemy is or what they have done, everyone needs to be treated equally under that law. We can’t change the law simply because the public is outraged.

4. How would you describe the film?

A. It is a Cold War thriller with the psychology of James Donovan's actions at its heart. It’s fascinating to see how an honest, hard-working lawyer like Donovan gets drawn into the powerful corridors of the CIA and the FBI and the subtleties of international relations between America and the Soviet Union at that time.

5. Tell us about the look of the film.

A. The sets are all incredibly beautiful with an amazing amount of detail. And the props on set were extraordinary and so completely accurate for that time, things like jars of peanut butter…stuff you just assumed didn’t exist anymore. As an actor, we are working amongst crafts people, and just being surrounded by these people with such skill and love for what they do is very inspiring. It is the combination of all these crafts which make a great film, and Steven leads so creatively.

6. How was it working with Tom Hanks?

A. Tom saw me in “Twelfth Night” in Los Angeles in 2003 before the production was famous and he was one of the first actors to come to it and to come backstage afterwards and talk to the cast, which was very exciting for everyone. The day before we started filming, he invited me over to read through the script with him, since a big part of the story is the relationship between their characters, which was very considerate. What surprised me the most about Tom is that he loves to make people laugh, and has this very goofy sense of humor which immediately puts people at ease. He also has a phenomenal memory, loves to do  crossword puzzles, and is a history buff.

7. How was it working with Steven Spielberg?

A. Steven trusts you to come, obviously, with your lines learned, and to know where you're going to and where you've come from, but he also expects you to have a willingness to play.  We never had any discussions about what he was hoping to convey with my character because it was more about making fascinating stories with real people and having interesting things happening to these people. He knew this story so well, and told me at one point that he had read the script at least 50 times before shooting even began. He has a very open, questioning, kind of presence, and if you watch him on set, he's often working with two cameras and has two monitors, each with very important images, but he is able to watch both of them simultaneously. Another thing about Steven is that he's really focused on the narrative. Some
directors are focused more on the feeling of the actors or on the beauty of the image or the unusualness of the image, but he's always concerned about where the audience's imagination is. He also likes to work very fast, but was always quick to ask if I needed additional takes of any scenes, which was quite kind of him, especially since my background is in British television where we didn’t have the time to do more than one or two takes, due to budgets.  But Steven will take the time when he wants something…he will stay with it until he gets what he wants.

8. What do you hope audiences take away from the film?

A. I hope people will find it to be an entertaining film, and one that will make them think as well. This is a film about an unsung civilian hero, James Donovan, who does the right thing at the right time in the right place. He risks his own comfort, safety and employment, and his family's comfort and safety as well, just to do the right thing, and that's an important story. But this is also a thriller, and is extremely relevant in the way we deal with international affairs, which is so different from the way we deal with family and business affairs, so it does have a resonance for the present issues of justice on an international front.

BRIDGE OF SPIES is available to own on Digital HD™ on 14th March and on Blu-ray™ and DVD on 28th March, courtesy by Twentieth Century Fox Home Entertainment.