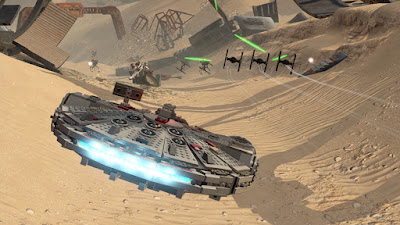 Warner Bros. Interactive Entertainment today released the FIRST official Gameplay Trailer for LEGO® Star Wars: The Force Awakens™, showcasing the exciting new content that will be coming to a galaxy… not so far, far away on June 28, 2016. For the first time, fans can get a glimpse of the brand new features available in this epic adventure, including:

·         Blaster Battles – Players can now engage in intense Blaster Battles, seeking cover behind nearby objects, which is a first for a LEGO game. Characters can then pop out from the safety of cover to fight enemies with blaster fire.

·         Multi-Builds – The enhanced Multi-Builds system allows players to choose from multiple building options to solve a puzzle and advance the game in different ways. For the first time, t he same pile of LEGO bricks can be used in multiple ways, with the player building and re-building different objects for different purposes.

·         Flight Gameplay – Experience the thrill of high-speed, action-packed flight gameplay like never before, piloting iconic vehicles (including the legendary Millennium Falcon) through arena-based battles and dogfights in space.

LEGO Star Wars : The Force Awakens marks the triumphant return of the No. 1 LEGO videogame franchise and immerses fans in the new Star Wars adventure like never before. Players can relive the epic action from the blockbuster film in a way that only LEGO can offer, featuring all of the storylines from Star Wars: The Force Awakens, retold through the clever and witty LEGO lens. The game will also feature exclusive playable content that takes fans and newcomers on adventures set in the time leading up to Star Wars: The Force Awakens, providing additional insight about the new movie and its characters. The game will be released on June 28, 2016 for PlayStation®4, PlayStation®3, PlayStation®Vita, Xbox One, Xbox 360, Wii U™, Nintendo 3DS™ and Steam (PC).