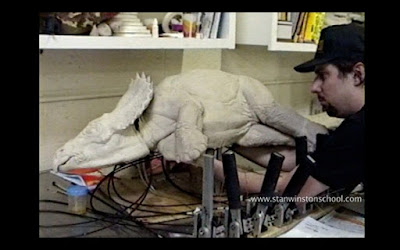 To bring to life JURASSIC PARK’s sick Triceratops, Stan Winston Studio designed and built a full-size puppet that performed alongside the actors on location in Hawaii. SWS Triceratops mechanical designer, Al Sousa, recalled the mech design process: “We built a small-scale version of the character before the full-scale so we could show Stan how everything was going to work. The breathing mechanism was basically a post underneath that pushed a lever up and down [to move] the skin up and down… the tail mechanism had movement from side to side and also up and down.  There were no hydraulics in this character. It was all just mechanical.”