Interview With Steven Spielberg On Bridge Of Spies 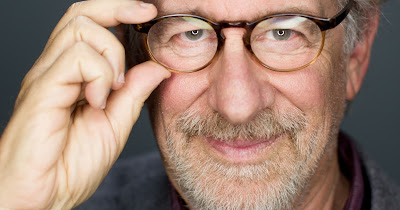 STEVEN SPIELBERG Q and A

“I’m really proud of it,” begins Steven Spielberg about his newest film Bridge Of Spies. His fourth collaboration with Tom Hanks following Saving Private Ryan (for which Spielberg won a Best Director Oscar), Catch Me If You Can and The Terminal, it follows insurance lawyer James B. Donovan (Hanks) as he is recruited to defend Russian spy Rudolf Abel (Mark Rylance) at the height of the Cold War, an assignment that leads to a life-threatening mission to East Berlin to secure a swap between Abel and US pilot Francis Gary Powers (Austin Stowell). Full of great performances, tense confrontations and bravura filmmaking, Bridge Of Spies continues the absorbing view of history contained in Spielberg classics like Schindler’s List and Lincoln combined with the nerve-shredding suspense of crowd-pleasers like Jaws and Jurassic Park. In an in-depth interview, he talks history, his personal connections to the Cold War, spying and a visit from one of the most powerful leaders in the world.
One of your great gifts as a filmmaker is finding stories from history that feel fresh and relevant. How do you do that?
I’ll make a sweeping statement that I will have to take back someday: I think history writes better stories than fiction. When you see something in history that is so compelling, you say, “Nobody could have made this up!”. History offers us stories that are almost beyond belief. Every time I pick up a biography or a book about an incident that happened, I immediately want to make a movie out of it. I could always find that one nugget, that piece of truth that no one has ever really talked about. I’ll go right to the footnote and say, ‘That is the story!”
How does that apply to Bridge of Spies? You seemed to have unearthed the last untold Cold War story?
Somebody came to me and said, “Do you want to make a movie about Gary Powers being shot down above the Soviet Union in his U2?” And that might have been enough for one whole movie. But Tom and I later found out that there was so much more to it than that. We came to realise that, as incredible as it might seem, these events really happened.
At the centre of the film is the relationship between US insurance lawyer James Donovan and Russian spy Rudolf Abel. It isn’t the usual mismatched duo we’ve seen a million times before.
It avoids stereotypes because the true-life incidents of Donovan and Abel avoided stereotypes. It was a very unlikely partnership. I wanted this movie to be the kind of relationship story where the audience couldn’t wait to see Abel and Donovan in a scene again.
What are your personal connections to the story?
I was a teenager during this time. I remember how scared I was. I remember the air-raid drills where we had to duck and cover under our desks and put books over our heads. I remember the films they showed us about what to do if you see a flash and what a nuclear bomb can do to a city, let alone a small suburban home in Phoenix, Arizona.  I was very well aware of all this.
How would you describe the film’s view of spying?
It’s not the most glamorous view. There’s a lot of gumshoe work and a lot of conversation. There’s a lot of waiting and pausing. There is a preposterous moment straight out of a Hollywood spy movie when the CIA operative gives Donovan a phone number to memorise and then immediately burns it. Donovan scoffs and gives him a look that says, “That’s right out of a movie but it’s not out of the movie I’m in!”
The film is about timeless values — integrity, moral courage — but it also shines a light on a lot of contemporary concerns and issues?
Back, in those days, we had an eye on each other. These days we have a jungle of eyes on each other and not even when there is important information to be snatched. Today hacking is a sport. Occasionally a hacker will hit upon actionable information that can make him some money or get him to flee the country. Anyone who knows how to manipulate electronic devices can spy on anybody else.
Power’s U2 mission is nothing if not a forerunner of today’s drones?
There’s a lot of spying today. We’re also in, not a Cold War, but what I would call a world of frosty relationships between Putin and Obama and China. There is a frost in the air today.
When you were shooting on Glienicke Bridge, the actual Bridge of Spies, you had a visit from Chancellor Merkel. How was that?
We saw her twice that day. She asked very appropriate, compelling questions. She actually came on the set on the coldest night we experienced throughout the shoot. We were dressed like we were making Everest and Chancellor Merkel came dressed in what I would call fall clothing. She didn’t look cold.
The film ends on a classic moment of Spielbergian suspense based around a phone call. Are those the kind of scenes you love to do as a filmmaker?
You know what I love? I love the waiting before the phone rings. It’s the kind of scene where, in the clichéd version, you would have the ticking of a clock. You would hear the ticking of a clock and suddenly the phone would ring. We just had them sitting in silence, waiting for someone else to do something first. I love those moments of waiting for the other shoe to drop.
Finally, which other historical figures would you love to make a movie about?
I would love to do a story about the Wright brothers one day. Ever since I’ve been a kid, I’ve been interested in that. I’ll have a character say, “The Plane! The Plane!”