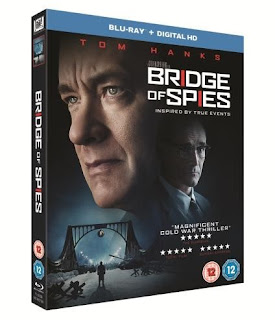 A dramatic thriller set against the backdrop of the Cold War, BRIDGE OF SPIES tells the story of James Donovan (Tom Hanks), a Brooklyn lawyer who finds himself thrust into the centre of the Cold War when the CIA sends him on a near impossible mission to negotiate the release of a captured American U-2 pilot. The tense, thrilling drama starring Tom Hanks and Mark Rylance will be released on Digital HD™ on 20th March and on Blu-ray™ and DVD on 28th March, from Twentieth Century Fox Home Entertainment.

Set during the height of the Cold War, between America and Russia, American lawyer, James Donovan, is recruited to defend an arrested Soviet spy, Rudolf Abel in court and then help the CIA facilitate an exchange of the spy for the Soviet captured American U2 plane pilot, Francis Gary Powers. However when Donovan gets to Berlin, he finds a country torn between Axis and Allied powers both vying for control. Donovan aims to do the unthinkable and stakes Abel’s return to the Soviets on two American citizens. High stakes and suspense power a story inspired by true events that capture the essence of a man who risked everything and vividly brings his personal journey to life.

Don’t miss this captivating cold war thriller as Bridge of Spies is released on Digital HD™ on 20th March and on Blu-ray™ and DVD on 28th March, from Twentieth Century Fox Home Entertainment.

•        A CASE OF THE COLD WAR: BRIDGE OF SPIES – Steven Spielberg and Tom Hanks share personal stories of the Cold War, and how experiences from their youth influenced the way they approached the film and why the history behind Bride Of Spies resonates across generations and is relevant in today’s political climate.
•        BERLIN 1961: RE-CREATING THE DIVIDE – Viewers are transported to another place and time as the filmmakers recreate the Berlin Wall just days after the 25th anniversary celebration of its downfall, and envision what it was like to cross through Checkpoint Charlie.
•        U-2 SPY PLANE – Spectacular footage of the U-2 plane shot at the Beale Air Force Base and a cameo appearance in the film by Francis Gary Powers son, Gary Powers. This piece also includes conversations with the Air Force liaison about the significance of the crash scene and why they got behind the film.
•        SPY SWAP: LOOKING BACK ON THE FINAL ACT – Gary Powers Jr shares memories of his
father’s experience as the filmmakers and cast recreate Cold War history at Glienicke Bridge, where the historic exchange of Soviet spy Rudolf Abel and American pilot Francis Gary Powers took place.

DVD Special Features:
A CASE OF THE COLD WAR: BRIDGE OF SPIES – Steven Spielberg and Tom Hanks share personal stories of the Cold War, and how experiences from their youth influenced the way they approached the film and why the history behind Bride Of Spies resonates across generations and is relevant in today’s political climate.