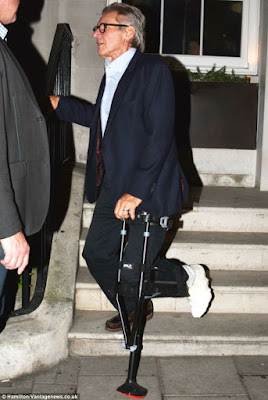 Foodles Production, the production company behind the filming of Star Wars VII: The Force Awakens in the UK are being prosecuted over the incident that led to Harrison Ford breaking his leg on set.  Ford was hit by a hydraulic metal door from the Millennium Falcon on the Pinewood set on June 2014.

The Health And Safety Executive has brought four criminal charges against Foodles Production (UK) Ltd - a subsidiary of Disney.  Foodles Production said it was "disappointed" by the HSE's decision.  A spokesperson added: "By law, employers must take reasonable steps to protect workers - this is as true on a film set as a factory floor."

Representatives of the production company will appear at High Wycombe Magistrates Court on 12 May.

A spokesman for Foodles Production said: "Cast and crew safety is always a top priority. We provided full co-operation during HSE's investigation into the on-set accident that occurred in June 2014 and are disappointed in HSE's decision."

Harrison Ford talked about the incident on the Jonathan Ross show back in December.