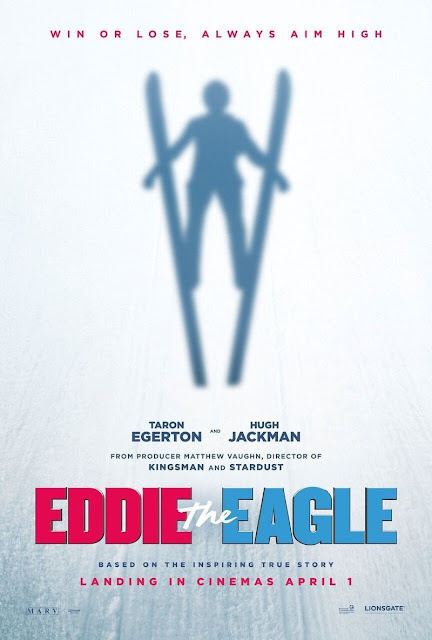 I have never been known as a sports enthusiast, but there has always been something about the Winter Olympics that has held a sense of excitement and joy to me (except for when they were in my home state, oddly enough.). I had a few Olympic heroes as a kid: Scott Hamilton, Jane Torvill and Christopher Dean, Katarina Witt, Brian Boitano . . . and Eddie Edwards.

In addition to being the only one of this group that was not a figure skater, Eddie was also the only one who never medaled. But that isn't isn't why you loved Eddie. You loved Eddie because not only did he get to go to the Olympics, but he took you with him.

Taron Edgerton (Kingsman: The Secret Service) stars as Eddie, an awkward loner growing up in England, obsessed with a dream: to be an Olympic athlete. Despite the fact that he takes to any sport he tries like a duck to rednecks, the boy simply refuses to stop trying. His mother (Jo Hartley) is mildly  terrified that her clumsy son is going to get himself killed, but cannot bring herself to crush his dream. His father, on the hand, seems fully aware that he is not only the Dad character in a movie, but a quirky, stern, British one at that, and therefore must follow the handbook and believe that Eddie needs to get his head out of the clouds and learn the family trade.

When Eddie takes to the idea of skiing, he falls short of making the Olympic team, in no small part because the team doesn't want him. Every time the young man comes close to reaching his goal, the officials change the rules make it harder to get on the team. But when Eddie gets the idea of becoming the first British skijumper, he may have found his way in due to lack of competition.

Enter Bronson Peary (Hugh Jackman), a swaggering, alcoholic American mechanic who works on the grounds where Eddie is training. But Peary is more than just a handyman: he's was once a great skijumper until he lost, took to drink, and retired in disgrace, much to the dismay of his mentor (Christopher Walken.).

It goes without saying that the cynical Peary reluctant starts to admire Eddie's tenacity and eventually is won over to becoming his trainer, and that as Eddie strives to conquer the slopes, it eventually inspires Peary to conquer the bottle. This is an extremely formulaic feel good sports movie,rand much like its title character, this movie isn't about being unpredictable It's about being fun and inspiring. It's about pleases the crowd, and that it does, with the same gusto as its namesake. Between the sincerity of the lead performances, the wit of the script, and the thrilling, creatively shot jumping sequences (this is the only time I have ever actually liked the use of GoPro cameras in a feature film), the movie delivers on every level as a work of entertainment. It's pure joy from beginning to end.

It's also heavily fictionalized. Jackman's character is completely made up for the purposes of the film (he's not even an amalgam of several real life people, he's just flat out imaginary) and much of Eddie's training and formative process is, too say the least, simplified. But when it's all said and done, this isn't a major chapter in world history, it's the story of how a legend was born, and much like The Revenant (a very, very different film to say the least ) it's almost essential in capturing the spirit of this story to embellish it. Some may feel otherwise and go harder on the film for it's fast and loose approach, but I simply had too much fun, was far too moved, and too overcome with nostalgia to hold any of this against the movie.

Edgerton is completely unrecognizable, and just as capable of carrying a film with thick glasses and at least forty extra pounds of tubbiness as he was as the smooth, stylin' bad boy in Kingsman. Jackman, one of Hollywood's most charming actors with one of it's very worst track records for appearing in good films, is as good in this as he in an actual good X-Men movie.The two could not play better off of each other, and when you add to that Christopher Walken and Tim McInnery, you've got the most entertaining cast of the year so far by a number of yards.

Eddie may not be a true champion, but it is spirited fun that left me feeling glad to be alive.