There are a lot of Kickstarter campaigns out there, some good, some not so good.  But every once in a while you get one that comes along and you know it's going to be a hit.  CLEANIN' UP THE TOWN is one of those campaigns.  It's a professionally done documentary on the 1984 classic, GHOSTBUSTERS.  With interviews with cast members including Dan Aykroyd, Harold Ramis, Ernie Hudson and Sigourney Weaver to name a few and director, Ivan Reitman.  The documentary is being produced by Bueno Productions and their aim is to 'deliver the most complete account of how these classic films were made and hence have interviewed over 70 members of the cast and crew responsible for bringing these stories to life.'

Their Kickstarter campaign aims to bring them £40,000 and they are well on the way to achieving that goal.  I've personally supported it.  One thing that Ghostbusters is missing is a really good behind the scenes documentary.  It deserves one, after all Ghostbusters is a classic timeless comedy. 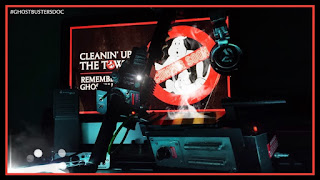 The Kickstarter rewards are worth checking out.  For just a £10 donation you can get your name in the documentary credits.  How cool is that?  We're so pumped for this campaign that we're going to
put the Kickstarter widget on our front page for it's duration.  The Bearded Trio really hope you can support it and spread the word.

Here's a little write up on the doc along with a trailer and links.

Eight years in the making and with over seventy cast and crew interviews Cleanin’ Up The Town: Remembering Ghostbusters is the definitive documentary that charts how Ghostbusters and Ghostbusters 2 came to fruition and how these films were made by the people that made them. Interviews include actors in the film Dan Aykroyd, Harold Ramis, Ernie Hudson, Sigourney Weaver Annie Potts, David Margulies, William Atherton, Kurt Fuller and Jason Reitman, Director Ivan Reitman, Producer Michael C. Gross, Visual Effects crew including Richard Edlund, Terry Windell, Dennis Muren and Steve Johnson, musicians Ray Parker Jr and The Bus Boys. In this extended cut we want audiences to experience a little more of what they can expect from this feature length documentary.
CLEANIN' UP THE TOWN: Remembering Ghostbusters
@GhostbustersDoc #GhostbustersDoc
SUPPORT OUR KICKSTARTER
https://t.co/vUHSrOQ9Xe
Facebook: https://www.facebook.com/Ghostbusters...
Twitter: https://twitter.com/ghostbustersdoc
Trailer for Bueno Productions LTD edited by Eastwood Allen
http://www.buenoproductions.com