Star Wars Jogcast - The Reaction Awakens. I Give My Opinions on Star Wars The Force Awakens 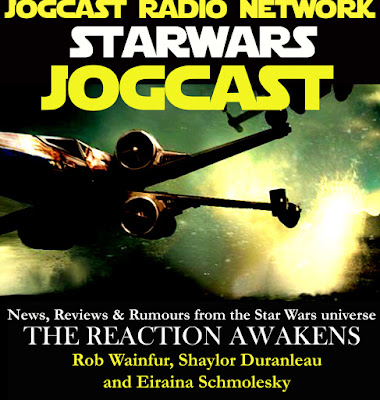 In the latest Jogcast Radio episode I reveal my thoughts on Star Wars The Force Awakens to Alan R. Ryan, host of the popular podcasts.  I hold nothing back, I let it all out.  Did I like it?  What didn't I like about it?  What was I embarrassed about before entering the cinema?  All is revealed on The Reaction Awakens.

Also joining Alan to give their opinions on the J.J. Abrams movie is Shaylor Duranleau and Eiraina Schmolesky.  It's a show not to be missed.  Here's the show notes along with the link to the show.

Welcome Jogcasters to the ultimate look at The Force Awakens, here with three fans which are listeners of the show, and great pals in the fandom as well. On tonight’s episode: Rob Wainfur joins us from The Bearded Trio to see what he thought of the film, and especially the soundtrack, as he’s a huge fan of John Williams, we also have Shaylor Duranleau and his partner Eiraina Schmolesky from Steampunk Star Wars with their thoughts, and their speculation on where things may go with the new films. This is a big three hour cast, so make sure you’ve got plenty of coffee and be ready to be spoiled silly, here at Jogcast.

Listen to the show here.