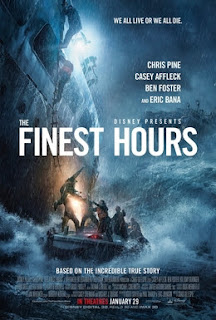 The true story of a Coast Guard rescue mission in 1952 off the coast of Cape Cod, The Finest Hours is a by the book, predictable, formulaic, old fashioned,  feel good, triumph of the human spirit, and a bit of shameless Disneyesque Americana.

And I thoroughly enjoyed it.

Chris Pine plays delightfully against type as Bernie Webber, a shy, even somewhat square Boatswain's Mate First Class, who is romancing a local girl and living in the shadow of a previous rescue mission, wherein he faced impossible odds and was unable to save the lives of local men. It seems clear that most people don't blame Webber, with the exception of Carl Nickerson (Matthew Maher), a local man whose brother was lost, and to some extent, Webber himself.

But when a massive storm hits and two oil tankers, SS Fort Mercer and SS Pendleton, both split in half, Webber must put the demons of the past aside. More than 30 sailors are aboard the Pendelton, and Engineer Ray Sybert (Caey Affleck) organizes a strategy for his fellow survivors, with the support of his superior, Frank "Pops" Fauteux (Graham McTavish). Some of the men don't trust Sybert, but his daring plan to run the ship aground is the only chance they've got to survive.

As word of the disaster reaches the Coast Guard in Chatham, Mass., Chief Warrant Officer Daniel Cluff (Eric Bana) orders Bernie Webber to pick a crew and mount a rescue mission. Webber takes three men out on a life boat in an attempt to save the crew against seemingly impossible odds.

This is not a movie that is trying to be bold or groundbreaking, and it's certainly not trying to be edgy. It's a throwback that wears its sentimentality on its sleeve, but it does so honestly and sincerely. This is almost exactly the movie The Perfect Storm failed so spectacularly to be: an exciting, tense and dramatic adventure about the perils of men against the elements at sea. And while it's not nearly as innovative as Ron Howard's underrated epic In The Heart of the Sea, I found myself caring a good deal more about the fate of these characters, and director Craig Gillespie (Lars and the Real Girl, Million Dollar Arm) has a strong sense of pacing and how to build tension without making it feel too forced to feel like reality. 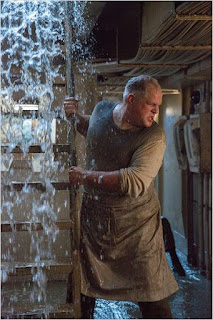 The cast is very strong, lead by Pine, who can't seem to find a hit in a lead role outside of Star Trek, but continues to impress anyway, and Holliday Grainger (last seen as one of the stepsisters in Cinderella) makes a very strong impression as his headstrong bride to be, Miriam. As Webber's crew, the always reliable Ben Foster provides a perfect cynical counterpart to Bernie's all American optimism, and The Big Short's John Magaro and American Sniper's Kyle Gallner lend able support, although you never really feel like you get to know any of these guys. Some of that is intentional, but Foster's character left me feeling  I was missing something. In general, the script far too often goes for character types instead of characters, but the actors really rise to the challenge of making them feel real.

Onboard the Pendelton, Affleck and McTavish really command the screen, especially when they are together, and this largely makes up for the somewhat clunky and vague establishing of  exactly who most of these characters are (does this ship have any kind of a Captain?). Abraham Benrubi (Jerry on TV's E/R for so many years, and Mose in Kevin Costner's Open Range) as the ship's Teddy Bear of a cook just makes you want to give him a big hug as he tries to keep spirits up by fruitlessly attempting to get people to join him in singing "Sit Down, You're Rocking The Boat" from Guys and Dolls. Benrubi, who is destined to one day play "Tummy" in a live action version of Disney's Gummi Bears (I will make this happen some day, I swear it on my own blood) is one of those character actors that never seems to get the credit he is due, but his unsung presence always makes whatever he's in that much better.

The musical score by the great Carter Burwell is both rousing and beautiful, and it sets a perfect tone. If there is a major failing of the movie, it's the 3D, which just wasn't up to snuff. I get the reasoning why the sequences at sea make it a candidate for 3D, but a movie set largely at night doesn't need you to be putting on glasses to make things even darker, and most of the time the effect was really pretty lackluster, but perhaps that was just a flaw in the presentation of the film.

All in all, this is a real crowd pleaser that is not likely to draw big crowds, but those that do come into the theater will be glad they did so.

(And yes of course I thought several times about the fact that Nero was Jim Kirk's commander, but both actors are good enough that it is nowhere near the distraction it should be.).