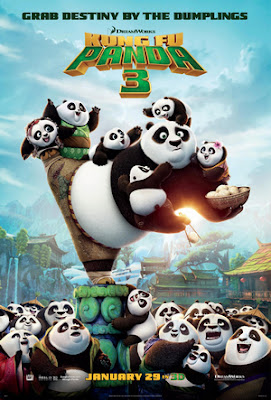 The original Kung Fu Panda was really something of a breakthrough movie for DreamWorks animation. It was the point when they started to kick things up a notch in terms of quality of animation, and really start to compete with Pixar (as fun as the first two Shrek movies were, the animation wasn't even in the same league as Monsters, Inc., no matter what the Oscars might have said.). It was also the point when their stories started to become more sophisticated. The second film in the series was a breathtaking, eye popping action-adventure film with a surprisingly dark edge but hilarious comic highlights, as well as a good deal of dramatic depth. Honestly, that movie was the most fun I've had with an action picture in the past several years, and I'll always remember sitting in a darkened theater with my brother, my nephews and my niece, and just being blown away by the awesome awesomeness of this epically awesome moviegoing experience. This was the turning point when we had to start asking ourselves: is DreamWorks getting more interesting than Pixar? The presence of Guillermo Del Toro as an advisor on the film seemed to be a partial explanation for both the dark tone and the commitment to quality, but whether it was because it was too dark or simply that the summer was over crowded, Kung Fun Panda 2 didn't kick butt at the box office the way it was supposed to, and those of  us who loved it so much were left fearful that a third installment wasn't going to happen. As such, I honestly was as excited for part 3 as I was for Star Wars: The Force Awakens. As such, I think I was setting my expectations unrealistically high. But even going into the movie with such lofty hopes, it managed to deliver a thoroughly enjoyable experience.

The story centers around Po reuniting with his biological father voiced by (Bryan Cranston), who we learned was still alive at the end of the last film. Naturally, the presence of Po's Panda Dad makes Father Goose (James Wong) very uncomfortable, and he fears losing Po. But a dark shadow is descending over China in the form of the Jade Zombies, lead by Kai (J.K. Simmons) a late Kung Fu master who has escaped from the spirit realm and who will stop at nothing to steal the Chi of every kung fu master. Po must travel with his Panda Dad to a secret sanctuary of pandas to learn the secret of Chi, and find inner peace.

The studio is definitely being mindful not to get too dark with this one (though Del Toro is credited as producer), and reviews calling it a Return of the Jedi to the last film's Empire Strikes Back are quite apt, as this installment is much softer, cuter, more kid friendly and commercial than the last one. In fact, the emphasis on the panda village, in particular all of the panda children, can't help but make you think of the Ewoks, and for better or worse, the cute and cuddly factor is really ramped up to be a much more major focus (a bit too much so for my taste, given that we don't grow as attached to these characters as I felt I was supposed to be.). That being said, for all of its detractors, Return of the Jedi is still a blast, and so is Kung Fu Panda 3.

Black, Cranston and Jolie could not be better in their roles, and J.K. Simmons does a great job as the villain, even if the character isn't as interesting as Gary Oldman's power hungry peacock in the second film. Seth Rogen, David Cross and especially Jackie Chan's Monkey have some endearing moments, and of course James Wong steals the movie yet again as Po's adopted father, one of the best characters in the history of animated films, and perhaps the highlight of the film is the unexpectedly touching friendship that develops between Po's two fathers. Less successful is Kate Hudson as a completely superfluous character named Mei Mei, a ribbon dancer who is infatuated with Po. It feels like they had bigger plans for this character, but she somehow got lost in the shuffle, and in the end she's just kind of annoying. The action scenes are solid and better than average, even if they don't quite compare to what we saw last time (there is also a bit of a feeling that the studio is trying to spend a little less money, given the disappointing returns on the last film.). But the final confrontation, when Po finally reaches his full potential, it absolutely joyous.

All in all, this is a highly enjoyable family film, and a satisfying rap up to the series. I strongly suspect that it's only going to grow on me more with repeat viewings, and I look forward to adding it to my home video collection.