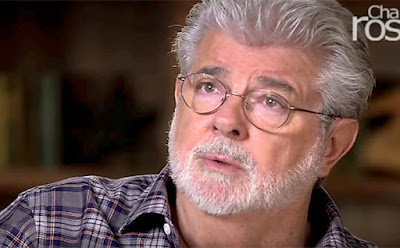 George Lucas has issued an apology over his comparison of Disney to 'white slavers' on his interview with Charlie Rose on CBS.  The comment has spread like wild fire across the internet but unfortunately his apology hasn't so we feel we should post his statement here:

“I want to clarify my interview on the Charlie Rose Show. It was for the Kennedy Center Honors and conducted prior to the premiere of the film. I misspoke and used a very inappropriate analogy, and for that I apologize. I have been working with Disney for 40 years and chose them as the custodians of Star Wars because of my great respect for the company and Bob Iger’s leadership. Disney is doing an incredible job of taking care of and expanding the franchise. I rarely go out with statements to clarify my feelings but I feel it is important to make it clear that I am thrilled that Disney has the franchise and is moving it in such exciting directions in film, television and the parks. Most of all I’m blown away with the record breaking blockbuster success of the new movie and am very proud of JJ and Kathy.”

For clips from the Charlie Rose interview along with a link to the full show click here.