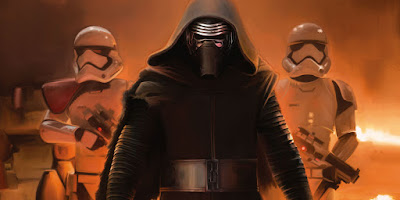 I continue my mini reviews of tracks from the soundtrack to John Williams' Star Wars The Force Awakens.

After Finn's Confession and Maz's Counsel which have a slow mysterious feel we are Force pushed straight into the dark side with the appropriate track thirteen, Kylo Ren Arrives at the Battle.  It's only fitting that the main bad guy of the movie gets his own theme just like Darth Vader before him.  John Williams recently commented on Kylo Ren’s theme, he tells us:

“There’s a more ruminative part that is usually done softly,” Williams said. “I don’t think it portrays any particular weakness, but possibly hesitancy. But then there’s the motif that’s often strong, that seems to be the embodiment of evil. I thought that it should be a relative of Darth Vader, but also something entirely different in terms of melody.”

Using a five note cue and repeated throughout this track has an aggressive feel and just like Ren himself, a sense of conflict and confusion.  It's powerful, menacing and moody with sweeping brassy statements.  I have a feeling it will be heard again in episode VIII. 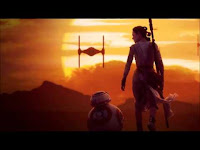 You can also read my mini reviews of: