Stargate Jogcast - "Children of the Gods." Listen To Our Latest Show. 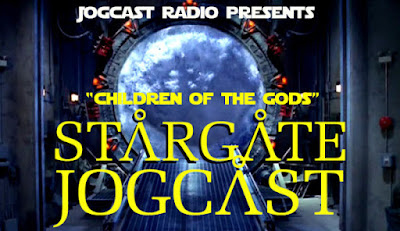 The lastest episode of Stargate Jogcast is out and features me talking Stargate SG-1 with fellow Stargate fan, Adam P O'Brien.  In this episode we talk about the first ever episode, ' Children of the Gods.'  We take a deep look at the episode, reveal some behind the scenes trivia and there's a couple of impressions in there too.  Here's the show notes:

Hi there Jogcasters, as we come back from hiatus we have our first monthly show leading into August: Stargate Jogcast: Children of the Gods. It is a look back at the first episode of the epic show SG1.

Rob Wainfur and I sit back and talk at length about the original episode, we look at trivia, and the events leading up to the series. We pull apart what worked and what didn’t, some of this trivia you may know, some you may not.

We also go through what we would change, and cut into the film etc. This is based on the new cut of the episode: THE FINAL CUT. It was done a few years ago, and makes the episode more film like.

After that we also have a good insight into some of the UK conventions with Rob and a surprise visit he had with a member of the SG1, one that loves beer, and the Simpsons, and loved putting things together in a previous TV show out of the oddest tools etc. We have this plus all the usual Michael Caine references from Adam, and all round humour you can expect from Jogcast Radio.

We will see you on the other side of the gate! Chevron 1 engage!


Listen to the show here.