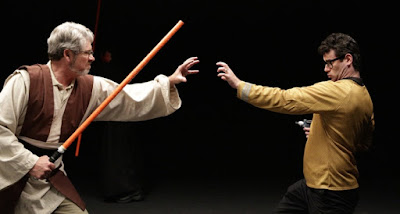 The folks who brought us the excellent "Steven Spielberg and the Return to Film School" video are lending their vast talents to bring two of my favourite franchises together, Star Wars and Star Trek.  It's called Star Trek Wars and it's another short movie where as they say, "no other fan has gone before."  Here's the film synopsis:

"After 40 years, George Lucas has retired from Star Wars but is having difficulty letting go. Meanwhile, Star Trek director J.J. Abrams, is cracking under the pressure of carrying on the legacy of Star Wars VII. As the rivalry builds between these moguls of space film history, the battle of Star Trek vs Star Wars will finally be decided once and for all."

Now the first part of their Kickstarter campaign got them enough money to film the movie in April and May over six days.  The project saw them collaborate with 150 filmmakers, actors, and artists.  They've also gone as far as to film the project in glorious 4K.

Now they've launched a second campaign and it's a relatively small one too.  They need $2500 and here's what they want to do with the extra money: 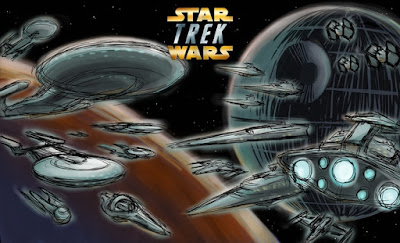 As with all Kickstarter campaigns there are rewards if you make a pledge.  From $5 you will get a personal thank you video.  Other rewards range from exclusive SDCC merchandise from as little as $25 all the way up to becoming an executive producer of the movie and getting an IMDB entry.

I can't wait to watch this in December, it's going to be a blast.  Head over to their Kickstarter page now and read more on the movie and the other rewards on offer.