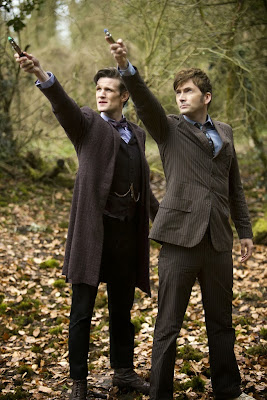 10.18 million people tuned in last night to watch the 50th Anniversary Special of Doctor Who on BBC1.  That makes it the largest overnight viewing figure since the first Christmas special with Matt Smith, "A Christmas Carol" which took 10.3 million.  What makes it even sweeter is the fact that a sci-fi show beat the popular reality show, X-Factor which, the time travelling show was going up against.  X-Factor fell to 7.67 million viewers.

The 50th anniversary of Doctor Who was also shown in cinemas up and down the country in 3D.  I attended a showing last night and what an experience.  Full of Doctor Who fans who were all excited for the upcoming event.  Matt Smith and David Tennant introduced the show telling you to put your 3D glasses on and feeling disappointed it was only in 3D.  "Where's the fun in that?" expressed the Doctor.  "12D is where it's at." 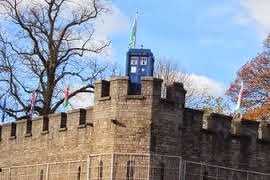 To celebrate 50 years of Doctor Who, the TARDIS has been popping up all over Wales and yesterday appeared on top of Cardiff Castle.  Wales being of course where the popular time travelling show is made.