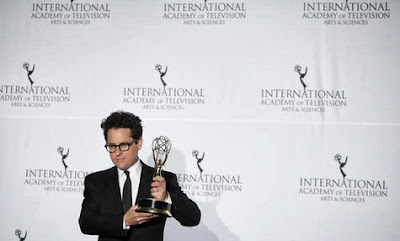 J.J. Abrams was presented with the Founders Award at the International Emmy Awards on Monday.  The director of Star Wars VII and previously the Star Trek movies was presented the award by Zachary Quinto who played Spock in the movies.  Abrams TV workd has included Lost, Fringe, Alias and the most recent Almost Human.


"It's a privilege beyond words to work in television," Abrams said as he paid tribute to friends, family and colleagues, notably his wife whom he thanked "for her support and brutal honesty."
Nominees for the 41st annual awards, which were hosted by British comic John Oliver, spanned 19 countries.
Read more and which countries won what over at http://kfgo.com/news/articles/2013/nov/26/uk-wins-three-international-emmy-awards-jj-abrams-honored/
THE BEARDED TRIO ON FACEBOOK
THE BEARDED TRIO ON TWITTER
THE BEARDED TRIO ON GOOGLE+