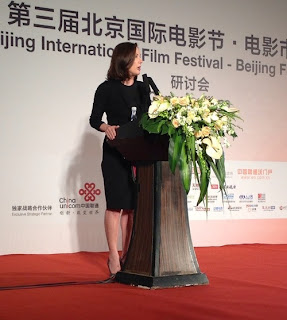 Kathleen KENNEDY, has said that The Walt Disney Company and Lucasfilm Ltd are seeking ever greater film-making collaboration in China.

Speeking at the Beijing International Film Festival, Kennedy who recently became president of Lucasfilm, described the attraction of China.

"The landscape of entertainment is changing — and a major part of that change — is China's growing role in the global film industry. – As a new member of the Disney family, — I speak for all of us — when I say — that we are thrilled to work with China. Disney and Lucasfilm are committed to working with the best filmmakers, wherever they are – and offering support to help develop young talent — however we can."

"The goal — is to grow China's homegrown animation talent, — develop projects, and deliver original content — that will reach people locally and around the world," Kennedy said. "To be able to export Chinese stories and culture — through this collective — is very meaningful to Disney, and it's something we are honored to be a part of."

On behalf of Disney she also revealed that the Hollywood studio has pledged a donation of $1 million the relief fund for Saturday's Sichuan earthquake.