The Old Republic Goes From Strength To Strength. 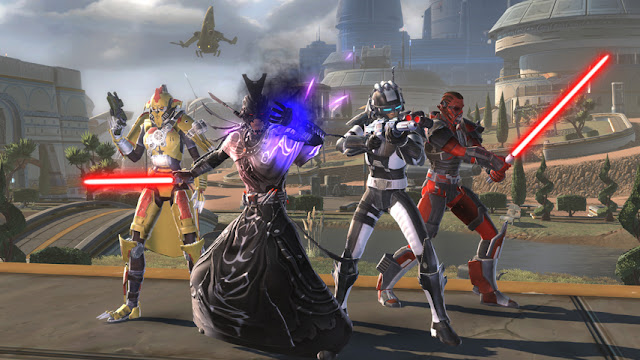 The Old Republic has had an impressive 2 million additional accounts created since the game went free to play.  Jeff Hickman, executive producer for the game wrote on the developer's blog that they had some uncertainty when the game was launched last year and were losing subscribers.  But since the game changed its strategy and went free to play, the game has had a new lease of life.  I must admit that since the game did go free to play that I've logged back on to the game and started playing as a new character. so the strategy works.
Here's what Jeff had to say and click the link below to see the full article.

Last spring, there was some uncertainty surrounding Star Wars™: The Old Republic™ as we were starting to lose subscribers and players were growing frustrated. In fairness, many of the complaints and worries were justified. In an effort to try to address everything, we just weren’t sufficiently focused on improving the core experience.
At the end of the summer, we announced that were going to make the game more enjoyable than ever before by working to improve three key aspects of the game: making it easier to find friends to play with (via Group Finder), increasing the cadence of our content updates (so players wouldn’t have to wait around for new stuff), and bringing back vitality to the game by reaching out to new players via a Free-to-Play option. In addition we introduced some cool new items for everyone to check out via the Cartel Market.
So how did it go? Well, you can see for yourself when you log in to the game. Our new, high capacity servers are teeming with people. Since launch of the Free-to-Play option we have had over 2 million new accounts created and have thousands of new players jumping in every single day. This means more people to play with, more growth for your guilds, more Warzone matches, and more ways for players to continue to advance their characters.