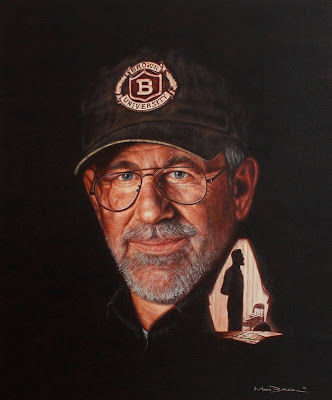 A portrait of Lincoln director Steven Spielberg by Irish artist Mark Baker will be signed by the director and auctioned at the charity Lincoln Ball in Dublin on Sunday in aid of Wicklow Hospice.

The event at the Burlington Hotel will also be attended by Lincoln star Daniel Day-Lewis and other members of the cast and follows the Irish premiere of Lincoln in Dublin earlier on Sunday.
Day-Lewis is a patron of Wicklow Hospice and helped to organise the charity ball.
Commenting on his painting, commissioned by Wicklow Hospice, Bray-based artist Baker said: "I spent the month of January working on the painting, in between other commissions I have been working on. I included a silhouette of Daniel Day-Lewis as Abraham Lincoln in an attempt to express Spielberg's vision of the actor as the great President.
"It is difficult to judge how much the painting will go for on the night. A painting done by myself of this size and detail would usually be valued at c.€2,000, but the added signature of Spielberg, and the fact that the film is tipped for an Oscar, are likely to enhance the value considerably.
"I'm just hoping that they like the finished piece and hopefully it helps raise much needed funds for the hospice."
http://www.rte.ie/ten/2013/0118/spielbergs.html