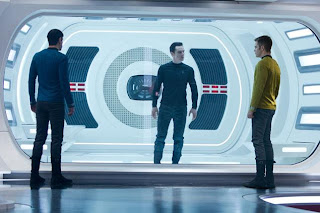 The news is in as we know that J.J. Abrams will direct Star Wars VII.  But what about Star Trek?  Will J.J Abrams direct Star Trek 3?

Paramount Pictures vice chairman Rob Moore revealed today that the filmmaker will still be committed to the franchise, after Star Trek Into Darkness debuts this summer. Here's what the studio executive had to say, revealing J.J. Abrams will be involved as a producer on Star Trek 3, and on Mission: Impossible 5.

"J.J. will continue to develop projects for us including a new Mission: Impossible, and he is committed to produce another Star Trek."

According to  Moore, Abrams — who directed both 2009′s “Star Trek” and the upcoming sequel “Star Trek Into Darkness” — will still be involved in some capacity with a possible third “Trek” movie, at the minimum as a producer, if not also directing the film.

So J.J. Abrams is still on the books.  It is quite possible that we could have a director making Star Wars and Star Trek at the same time.