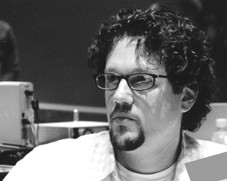 Now that J.J. Abrams is to direct Star Wars VII, there is now a strong possibility that Michael Giacchino may pick up the baton for the new movie too.  Giacchino has a history of being J.J. Abrams preferred choice when it comes to creating the music for his projects and if John Williams doesn't come on board then Giacchino must be the favourite.

However, what you may not know is that Michael Giacchino has had dealings with the Star Wars universe already and Disney too.  He wrote the score for the new Star Tours ride that reopened last year.  In fact I came across this video on Youtube where Giacchino is interviewed.  In the interview he mentions "when I was a kid I was 9 years old and watched Star Wars and it changed everything for me."  He also adds that when he was offered to work on Star Wars his response was "are you kidding me?  WHY wouldn't I want to work on Star Wars?"

So he's a fan, he respects John Williams previous arrangements of the classic Star Wars and if you listen to some of his previous work including the new Star Trek you know that he would be a good choice if the master John Williams doesn't come on board.