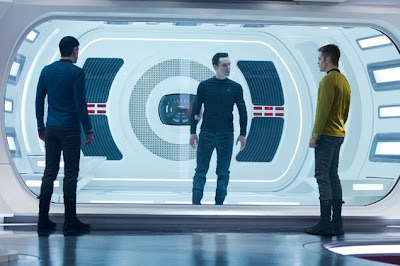 A terminally ill Star Trek fan has one wish and that is to see the new Star Trek movie before he passes away.  Unfortunately doctors have said he is unlikely to see pass May 2013.  A friend and wife of the dying man has posted on Reddit to spread the word to see if we can make this happen.  Apparently the movie Star Trek Into Darkness is more or less complete so there can't be any reason for Bad Robot to not allow this one request.  Spread the word people and lets make this happen.  Tweet to @Bad_Robot or/and Paramount, friends and anyone else.  If you've seen the movie Fan Boys then this will sound familiar but lets make it happen for a Star Trek fan.

My amazing healthy film buff husband diagnosed with leukemia (CML) at 38 had to endure 3 rounds of chemo before they found a bone marrow donor match had a Bone Marrow Transplant, which was MORE chemo, full body radiation & lots of other horrific things….then endured/survived 3 major infections + a massive GI bleed that put him in the hospital 10+ times over 3 1/2 years not to mention 100′s of doctors visits…. he is my hero; I am his caregiver – I would do anything to help him…
…he is now ravaged by a new TOTALLY UNRELATED cancer, (isn’t that a f**ker?) an aggressive and EXTREMELY rare vascular tumor that is crowding out his healthy liver tissue… they grew under treatment; there is nothing left to do but make him comfortable, at 41, he is jaundice & his liver is enlarged, his body has had enough, he has weeks to live.