Paramount Pictures and NAMCO Bandai Games officially set a release date of April 23 for the title. The game will be available for the Xbox 360, PS3 and PC, and the release date puts it almost a full month ahead of J.J. Abrams’ much anticipated follow-up to his 2009 reboot of the landmark television series.

But don’t expect the game to offer any hints — or spoilers — on “Star Trek Into Darkness,” which will be released May 17. “Star Trek: The Video Game” features an original story penned by Marianne Krawczyk, a veteran of the “God of War” series. The game allows players to assume the roles of either Capt. James T. Kirk or Spock and promises a different experience tailored to the personalities of each famed “Trek” character.

Still unknown is whether a Wii U edition of the game will be released. When pressed, a spokesman for NAMCO simply reiterated the release date for the Xbox 360, PS3 and PC.

Pre-orders for these platforms will begin Friday at most major retailers. Those who commit to buying the game will have guaranteed access to an “Elite Officer Pack,” which promises a host of random digital goodies such as stealth uniforms, a Vulcan Science Academy costume for Spock and a Starfleet sniper rifle, among other accessories.

Here's the cover art for the game.  I've seen 15 minutes of the game in action and can tell you that the game is looking good.  The combat  reminded me a little bit of Mass Effect.  Although the game looked heavily scripted I think this is no bad thing.  I want to be in the Star Trek universe and this game from what I've seen looks like its going to do that. 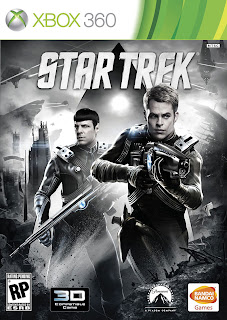