Universal Pictures, the Hollywood studio known for classic films such as To Kill a Mockingbird, Jaws, Out of Africa and All Quiet on the Western Front is marking its centenary by restoring and re-releasing some of its best-known titles.
Universal was founded on 30 April 1912 in the US state of New Jersey. The businessman Carl Laemmle, a German immigrant who became known as one of the founding fathers of Hollywood, led a team of entrepreneurs to set up the studio.
It was at a time when film-making was in its infancy and audiences were flocking to small cinema booths in converted storefronts, known as Nickelodeons. 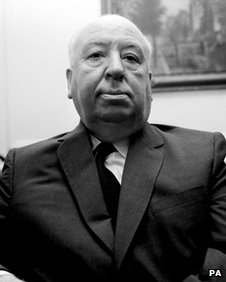 Alfred Hitchcock is just one of the legendary directors to work with Universal
"They were really taking advantage of this new phenomenon that was sweeping the country," says Jeff Pirtle, Director of Archives and Collections for NBC Universal.
Universal grew rapidly and the studio eventually moved west to settle in California - encouraged by wall-to-wall sunshine and cheap land - on the site of a former chicken farm.
The studio developed into its own city - the largest film production facility in the world. Today, Universal City, on the edge of Hollywood, is home to a vast complex that incorporates sound stages, archive vaults and a theme park.
"They didn't really set out to create the huge multi-media company that it is today," says Mr Pirtle. "I think it's grown beyond their wildest aspirations."
Over the decades, film-making legends such as Alfred Hitchcock, Steven Spielberg, Martin Scorsese and Ron Howard, have been associated with Universal.
The studio's centennial celebration sees the culmination of a major restoration programme, with 13 of Universal's best known titles getting a digital makeover for re-release on Blu-ray and DVD.
The films being restored are: All Quiet on the Western Front, The Birds, Buck Privates, Dracula (1931), Dracula Spanish (1931), Frankenstein, Jaws, Schindler's List, Out of Africa, Pillow Talk, Bride of Frankenstein, The Sting and To Kill a Mockingbird.
'Film-maker's vision'

In windowless, high-resolution digital editing suites, deep inside the studio lot, Universal's restoration artists carry out the painstaking task of re-mastering the films, frame by frame.
The aim is to remove blemishes in the images caused by scratches and tears in the original film. The film's colours and sound are also improved. 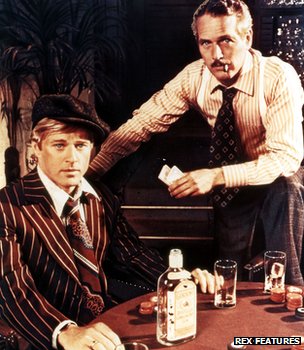 The Sting starring Robert Redford and Paul Newman was a box office hit 1973
"Our main concern in our restoration process is to maintain the film-maker's vision," says Peter Schade, Vice President of Content Management and Technical Services, Universal Studios.
"We will try to restore and bring the film back to the way it was originally meant to be seen."
Some sections of the original footage of Jaws, one of the films being released on Blu-ray, were badly damaged.
"Obviously I don't think that a film-maker, Steve Spielberg in this case, would want to see a tear in a key frame in his film," says Mr Schade.
It takes up to four hours to work on a single frame of footage. With 24 frames per second, the process is slow. The original negatives are scanned using a very high resolution.
The digital information is then manipulated pixel-by-pixel to eliminate the damaged sections. The end result is a digital version of a classic movie that can be preserved for generations to come.
As film-making technology evolves, there are few certainties about how Hollywood will tell its stories during the next century.
Many believe the death of film is imminent, with the digital world taking over.
"No matter how much computer graphics are involved or how the distribution avenues change, of our productions, inevitably you are still going to need actors and you are still going to need props," says Mr Pirtle, who manages the studio's vast archive of artefacts and costumes.
"Our department is still going to preserve and protect the way that films are made," he adds.
The challenge for Hollywood, as it embraces new technology, is to continue to captivate audiences.
"As long as you have a group of people gathering together in a big room to experience a film together, with that sound in the speakers around you and images up on the screen, laughing or crying or sitting on the edge of your seat, I think that magic is still going to exist," says Mr Pirtle.