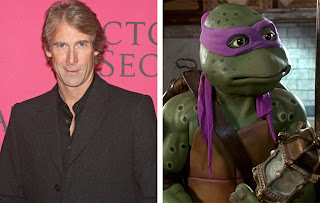 “Paramount marketing changed the name. They made the title simple,” Bay wrote overnight on his website. “The characters you all remember are exactly the same, and yes they still act like teenagers. Everything you remember, why you liked the characters, is in the movie. This script is being developed by two very smart writers, with one of the original creators of Ninja Turtles. They care VERY MUCH about making this film for the fans. Everyone on this team cares about the fans. Just give them a chance. Jonathan the director, is a major fan of the whole franchise. HE’S NOT GOING TO LET YOU DOWN.”

Here in the UK we are used to the name changing of TMNT.  When the cartoon and toys first came out in the eighties it was called Teenage Mutant HERO Turtles over here as it was thought Ninja was too violent.