A young musician behind one of the most poignant moments in the latest Spielberg blockbuster has enthralled pupils with stories from the set. 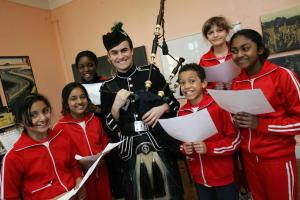 Callum Armstrong appeared as the piper who played while World War I soldiers left the trenches and marched towards enemy lines in the film War Horse.
The 22-year-old played for students at Westbury House school, in New Malden, on February 2.
He told children about the 18 horses used in filming who could play dead on demand.
But headteacher Margaret McSherry said the most amazing incident came during the filming of a battle scene set in no-man’s land.
She said Mr Armstrong came across a parcel marked "bomb" in a crater, which exploded shortly after he passed.
She said a technician later found his Blackberry, which he kept in his sporon, 300m away from the blast site.
The youngest students were then piped out of the room, which their Scottish music teacher had explained was a great honour.
Mrs McSherry said: "The students are still talking about it because it was so good."