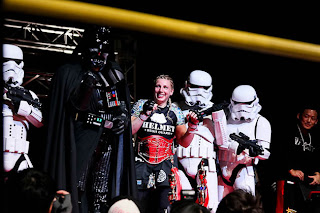 Amanda Lucas, the daughter of "Star Wars" creator George Lucas, won again in Japan this weekend. She beat up on Yumiko Hotta for two and a half rounds before submitting her with a keylock. With that win, she claimed the DEEP open-weight women's championship and improved her record to 4-1.

A record like that proves the force is strong with her. Darth Vader approved, and even showed up to celebrate. Skip to the 15-minute mark to see Lucas finish Hotta, and like he did in Cloud City, Vader just appears. At the 20-minute mark, he gives his clenched fist of approval, and then poses like a proud papa with Lucas in the final minute of the video.